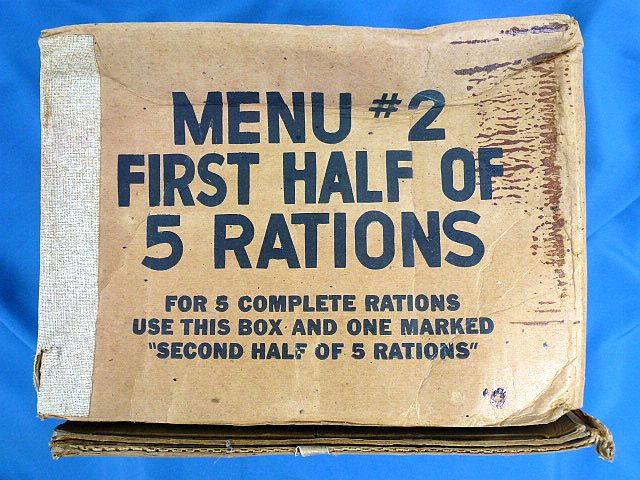 A cardboard box for the shipment of the “first half” of five “Menu # 2” rations, with these designations of the contents being printed on two sides of the box. The box was a part of the “Five in 1” ration system introduced in the middle of the war. The basis of the system was the packaging of rations sufficient to feed five men for one entire day. This box of the “first half” of the rations would have contained five rations, each comprised of a beverage (usually coffee, but possibly cocoa), bouillon, sugar, matches, crackers, and a confection, along with a can opener. These ration packages were to be coupled with the contents of the box labeled “Second half of five rations”, which would have contained five meat rations. This box was opened on the bottom and only three sides were actually cut, so the bottom of the box remains attached. As such, this is an intact rations shipping box. It measures approximately 10 inches wide by 7 1/2 inches tall by 6 1/2 inches deep. It shows wear, of course, since it was actually used to ship military rations during the Second World War, but it is still complete.