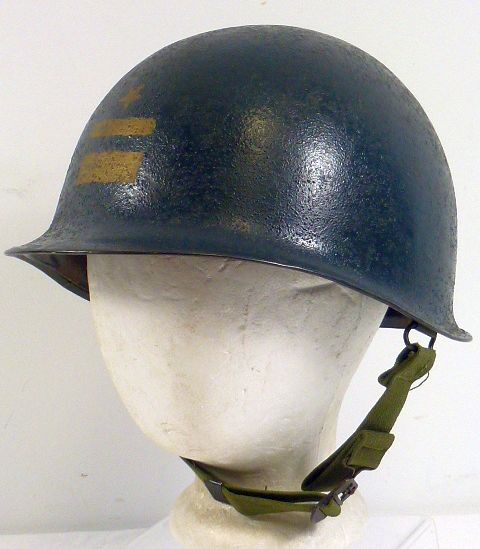 A fine and very uncommon example of a World War II U.S. Navy officer’s M1 combat helmet. The helmet shell is a front seam example with swivel bales, ant it was originally was painted in the standard cork infused green paint scheme of the Army, as were all such helmets at the time of manufacture. The exterior of this helmet was then repainted in the dark blue used by the Navy for its combat helmets in the Second World War. On the front of the helmet was painted one wide horizontal stripe and one narrow horizontal stripe, both surmounted by a star, this insignia representing the rank of a Lieutenant (junior grade) of the line combat branch of the Navy. There appear to be traces of a heat stamp number on the interior front of the helmet but the number is not readable. The exterior combat blue paint would rate as approximately 90% intact. The green web chin strap carries the earlier “raised bar” buckle system. The liner is a Westinghouse example which shows real operational use. One of the mounts inside of the liner has become detached from the liner itself, but it remains on the web strap and the liner interior support system is complete. The liner lacks the thin leather chin strap.