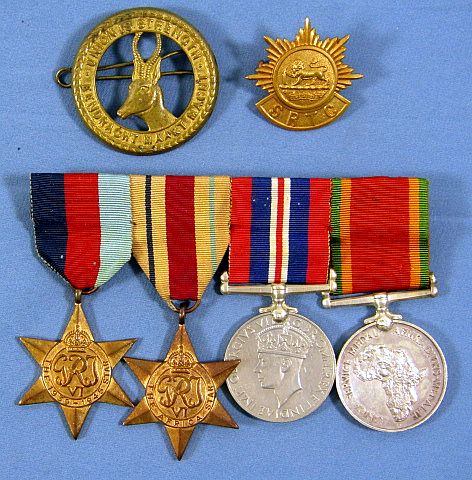 A bar mounted group consisting of the British 1939-1945 War Star, the British Africa Star; the British War Medal and the South Africa War Medal, all officially engraved to “C. Van Leeve” with his service number (the British did not officially name their World War II medals due to the cost of doing that, but the South African government was willing to spend the money on the naming of medals for their troops). The C prefix to the service number means that the man was “Coloured”, which in South Africa’s racial classification means he was of mixed race. C. Van Leeve was taken prisoner in North Africa and held in Italy at camp 65 Gravina near Bari, and at Stalag 4C at Wistitz in Czech Republic and at Stalag 4D at Torgau, Saxony.
He would have been liberated by the Russians in April/May 1945. The group includes a South African Infantry cap badge and a Southern Rhodesia Transportation Corps badge. Excellent condition.
Item Number: 29481 Category: Militaria of Other Countries