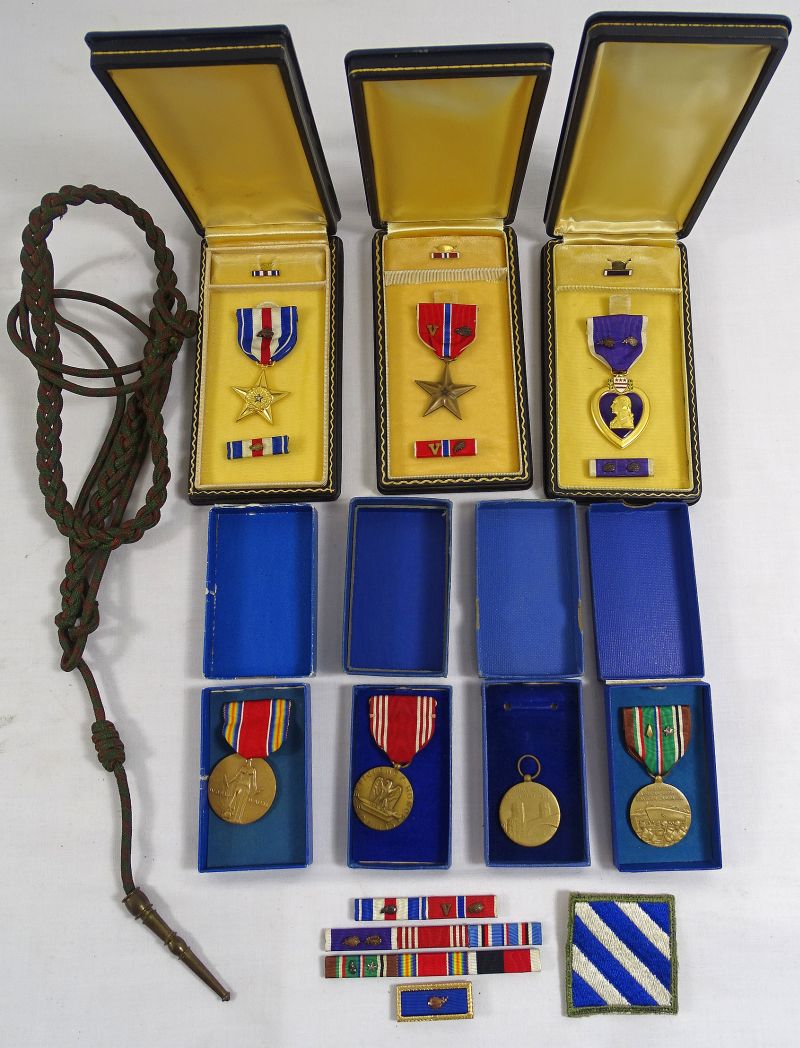 A very impressive World War II combat valor group consisting of the medals and insignia of Sergeant Louis D. Metz of the 15th Infantry Regiment, 3rd Infantry Division.  Sergeant Metz was from Sioux City, Iowa. A brief article about him appeared in the September 20, 1944, edition of The Sioux City Journal. That article reported on Metz’s service, his actions in combat, and his wounds:

Staff Sgt. Louis D. Metz, former Sioux City resident, who saw action in Africa, Sicily and Italy, has returned to McCaw General Hospital at Walla Walla, Washington after spending a 21-day furlough at the home of his parents, Mr. and Mrs. L.D. Metz, Odgen Meadow, Vancouver, Washington. Sgt. Metz enlisted in the army October 16, 1936, and went overseas two years ago with the 15th infantry, Third division. He landed at Casablanca at the time of the invasion and also saw action in the invasion of Sicily and Italy, taking part in the fighting for the Anzio beachhead. He received the Purple Heart for wounds received in the Sicilian campaign and an Oak Leaf Cluster for wounds received March 18 on the Anzio beachhead. Returning to the United States May 25, he was sent to McCaw General Hospital where he will remain for some time. He wears, beside the Purple Heart, the American Defense Ribbon with one Bronze Star, the African-European Theater Ribbon with one Silver Star and two Bronze Stars, the Expert Infantryman’s Badge, and the Good Conduct Medal. Mr. and Mrs. Metz formerly resided in Sioux City. Their other son, C. David Metz, Seaman First Class is a coxswain in the navy serving in the South Pacific.

The group is comprised of the following:

– Boxed Army of Occupation Medal (1947 contract label) with the medal missing its suspension ribbon and pin.

– Boxed European-African-Middle Eastern Campaign Medal with silver star for five combat campaigns and an arrowhead device for invasion participation. The article about Sergeant Metz quoted above establishes that his five combat campaign stars were awarded for his participation in the campaigns in Algeria-French Morocco; Tunisia; Sicily; Naples-Foggia; and Anzio. The combat prowess of the 15th Infantry Regiment is indicated by the fact that its participation in three of those campaigns entitled its personnel to wear an invasion arrowhead device on their European Campaign ribbons (Algeria-French Morocco;Sicily; and Anzio).

– Three rows of ribbon bars reflecting the award of the medals and decorations medals.

– Photocopies of a unit history of the 15th Infantry Regiment, obviously prepared shortly after the end of the war, as well as photocopies of unit rosters, one of which lists Metz as a Corporal and the other listing him as a Sergeant.

The fact that the 1944 newspaper article makes no mention of the Silver Star undoubtedly indicates that the recommendation was likely still being processed when Metz was evacuated from Italy due to his wounds. The fact that all of the decorations are hand engraved, as well as the fact that all of the medal ribbons and their ribbon bars are complete with their appropriate devices, would indicate that Metz was sent all of his medals and decorations by the Philadelphia Quartermaster after he had returned home in 1944.

All of the items are in excellent condition, with the exception of the Occupation Medal, as noted.