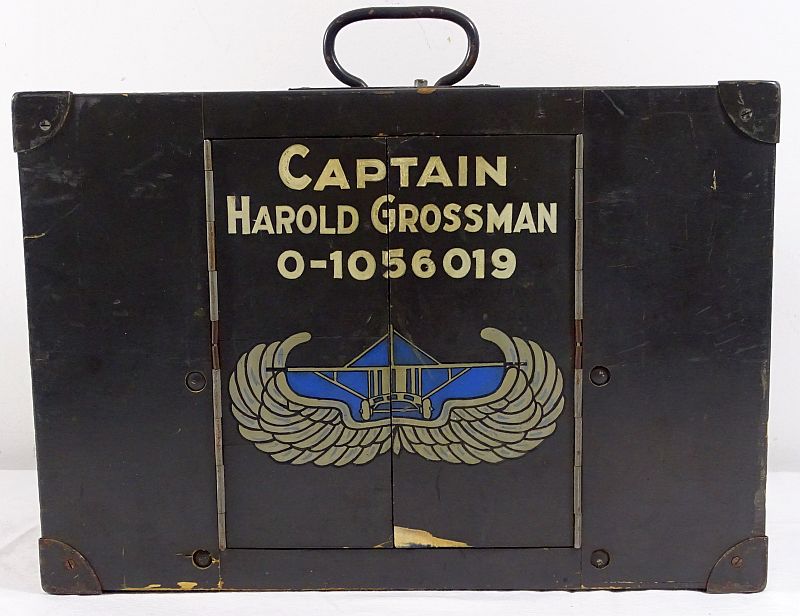 A extraordinary example of both the desire of American soldiers to find souvenirs and the tendency to personalize those souvenirs as trophies. This piece is a Luftwaffe barracks or canteen radio, designed to provide music and news broadcasts to Luftwaffe personnel. It is a Siemens portable long wave and short wave radio, Model K32 GWB. It is contained within a wooden carrying case that is decorated with three Luftwaffe eagles. The radio was captured by Captain Harold G. Grossman of the 101st Airborne Division. Captain Grossman then had someone very capable paint the wooden case to personalize his trophy. One who side of the case is painted with Grosman’s name, his service number, and the large badge of the army airborne glider troops. The interior sides of the doors of the radio were painted with Signal Corps insignia, the patch of the 1st Allied Airborne Army, and the overseas cap patch of the glider troops. The radio does not work at present, but it is quite heavy (a little over 18 pounds) and so it may well have all of the main interior components that would be necessary to make it operational. The radio measures approximately 18 inches wide by 12 inches high by 7 inches deep. The wooden case has a few chips and scuffs, but the radio and case are intact and make an impressive appearance. According to the obituary of Harold Grossman found on line, he passed away in July of 1996 at the age of 82. The obituary stated that “He retired in 1962 from the U.S. Army as a Lieutenant Colonel after 22 years of service, during which time he saw duty as a parachutist in the 101st Airborne Division in World War II.     (overseas shipping for this item is $109.00 as it weighs 22 pounds boxed)