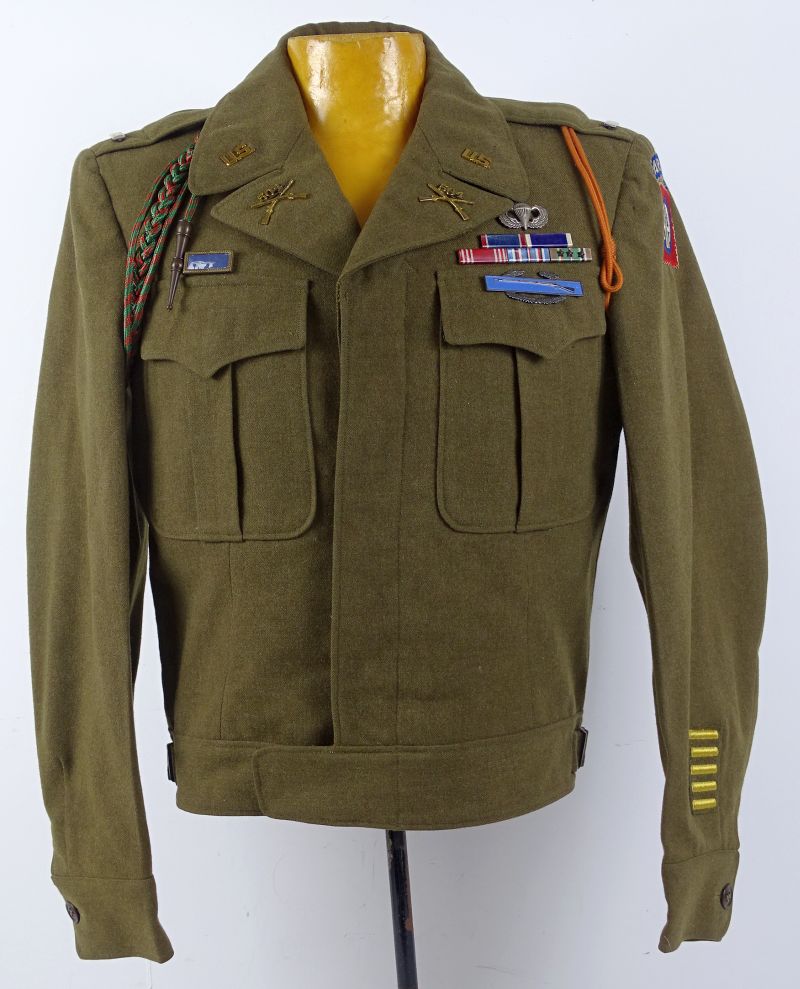 The Ike jacket is a regulation Army Officer’s jacket, with an interior pocket Quartermaster Depot tag dated in May of 1945. The tag bears a stated size of 36 Regular, while inside of the collar the size of “34 L” is written on the lining. The collar of the jacket carries numbered infantry officer insignia for the 504th Parachute Infantry Regiment. Above the right pocket is the ribbon of the Presidential Unit Citation. Above the left pocket is a sterling silver, pin back paratrooper wing, below which are two clutch back ribbon bars with plastic covered ribbons for the Distinguished Service Cross; the Purple Heart; the Army Good Conduct Medal; the American Campaign Medal; and the European Campaign Medal with three campaign stars. Below the ribbon bars is a sterling silver, clutch back Combat Infantry Badge. On the sleeve of the left shoulder is the insignia of the 82nd Airborne Division, while on the lower left sleeve are five overseas stripes, reflecting two and a half years of overseas service. The jacket carries the rank insignia of a Second Lieutenant, as well as the fourragère  of the French Croix De Guerre and the orange lanyard of the Dutch Military William Order. The fact that the rank of the officer was that of a Second Lieutenant, coupled with the length of overseas service, and the presence of the Army Good Conduct Medal ribbon, strongly suggests that the officer who wore this jacket originally fought as an enlisted man and that he was commissioned in the field late in the war. The 82nd Airborne Division had only 32 men who were decorated with the Distinguished Service Cross in World War II. Further research on those recipients could very well enable the owner of the jacket to be fully identified based upon the service record as reflected on the jacket. The jacket has a small hole in the right collar, but otherwise it is very clean and makes an excellent appearance.