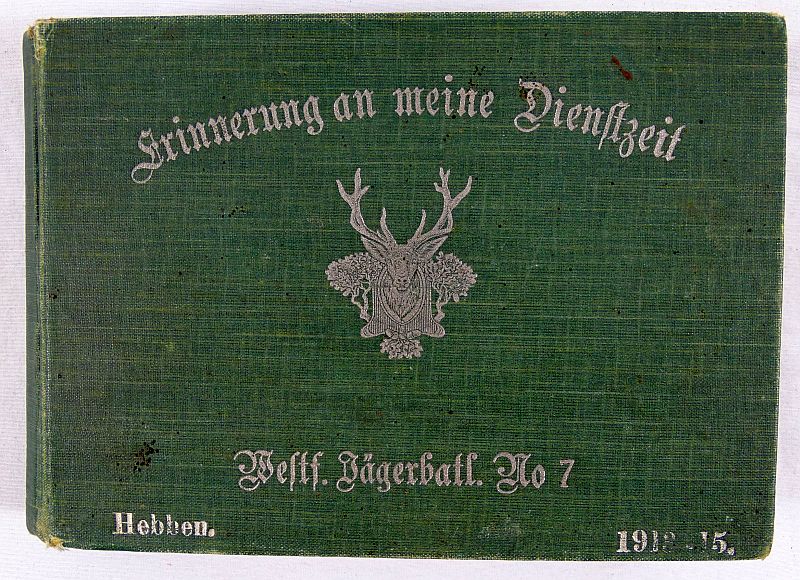 The album has an embossed decorative cover the carries the “In Memory of My Service Time” heading above the emblem of the Jaeger units and the designation of Westphalian Battalion Number 7, with the dates of 1913-15, although many of the photographs within the album bear wartime dates after 1915. The album contains approximately 73 photographs, and each of the photographs is postcard size, being about 3 1/2 by 5 1/2 inches in size. The photographs are of a wide and interesting variety, showing soldiers in dress uniforms, field gray, and drill uniforms, wearing visor caps and mutzes and shakos. There are photos of soldiers in camp, on parade, and in the field of combat. There is a wedding photograph and a photo of an officer with his loyal dog. One photo shows children and the boys all are wearing kinder military uniforms. There is a photograph of the grave of Bavarian soldiers near the front, and of wounded soldiers in their hospital bed. The album measures 5 by 7 1/2 inches and 1 1/2 inches thick. Many of the photographs have writing on the reverse, with a few having actually been sent as postcards through the mail. Overall a fascinating look at the First World War from the German viewpoint in overall excellent condition.