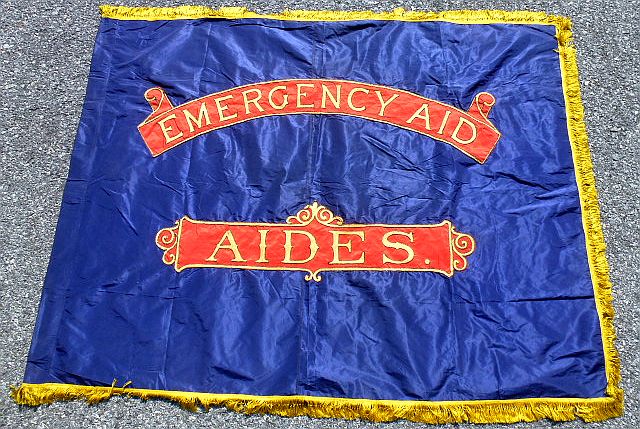 Heavy silk material with separately sewn embroidered panels bearing the words “Emergency Aid” and “Aides” on both sides of the flag. Approximately 50 inches by 68 inches in size, exclusive of the fringe. There is a cotton lined sleeve on the hoist edge which has leather attachment tabs at the top and bottom. Some of the stitching which secures the embroidered panels to the flag is loose, but easily tacked back on to the flag.

The Philadelphia Emergency Aid Society was founded in 1914 with the outbreak of World War I. The following is stated about the organization of the website www.hiddencity.org:

“When World War I broke out in 1914, its unprecedented scale and impact in Europe drew relief efforts from cities and towns throughout the United States. In Philadelphia, which had no local chapter of the Red Cross, a group of eight women banded together to create the Emergency Aid Committee, soon after renamed the Emergency Aid of Pennsylvania (EAP). Under the leadership of Mary Brown Warburton, wife of the publisher of the Philadelphia Evening Telegraph, this volunteer organization formed with the mission of carry[ing] on both at home and abroad, emergency and relief work for the benefit of the military forces and the civilian populations of the United States and of their Allies. The group was the first organization in Philadelphia to send relief supplies to Europe, organizing drives for food, clothing, fabric, and money to send to soldiers and civilians abroad.”

This flag was obviously carried and displayed by the ladies of the organization, the “Aides” who made up the membership. It is ex-Wanamaker Flag Collection (for more information about the Wanamaker Flag collection, see the subject section of “Wanamaker Collection Deaccession Program” on the website of the Flag Heritage Foundation, at www.flagheritagefoundation.org.