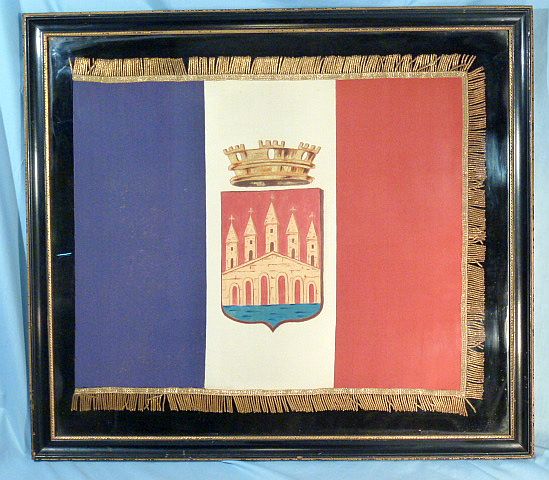 A framed silk French flag that was presented to an American Red Cross worker in 1918 when she was made an honorary citizen of the town of Cahors.
The flag is approximately 21 inches by 17 inches with an additional 1 inch of gold bullion fringe. The overall size of the framed flag is approximately 27 inches by 24 inches.
On the back of the frame is attached a handwritten statement of provenance. The statement reads:
“Flag of Cahors, France. Presented to Alice Ingersoll Stuart (Thornton) December 1918 when she was made an honorary citizen of Cahors by act of the Municipal Council at the completion of her Red Cross work in the Department of the Lot (France). The flag is made of ribbon sewed together by Madame Marie Due of the local branch of the French Red Cross. Her husband painted the coat of arms of Cahors on the white ribbon, which symbolizes the famous Port Valentre, built across the river Lot at Cahors and is one of the oldest and most perfect medieval bridges in France. The flag was presented at a public ceremony attended by the Mayor, the Prefect, and the local French Red Cross. [Signed] Alice Ingersoll Thornton, Washington, October 3, 1950. For the American Red Cross Museum.”
The exact nature of Mrs. Thornton’s work in France is not known, but it must have been exceptionally significant. According to a newspaper article in The Washington Times of November 14, 1919 (page 11), she was a citizen of Washington, D.C. Her husband, a Canadian, was killed in action in 1917. As a result of her work in France for the Red Cross she was made an honorary citizen of twenty French towns. She was also decorated twice by the French Red Cross and once by the French government.
The flag is in excellent condition. The frame is in very good condition with minor nicks. There is some brown paper missing from the reverse of the frame. The interior of the glass could use a cleaning.
Overall excellent condition for a very impressive World War I presentation flag.