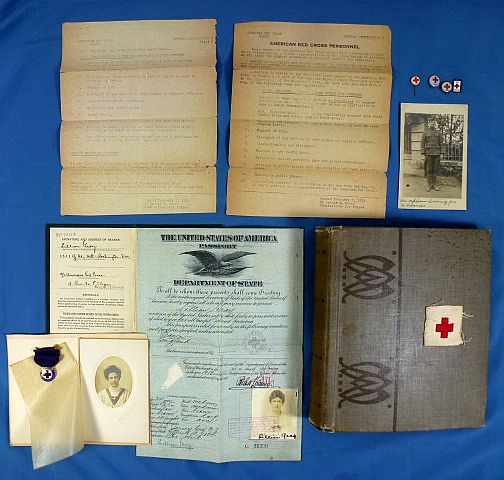 A photograph album and scrapbook, together with additional documents and memorabilia, of Lillian Gray, who served in France with the American Red Cross. The group includes Gray’s scrapbook, her passport, a Red Cross Service Medal, and several Red Cross fund raising pins. Gray’s album is approximately 8 3/4 by 10 by 1 3/4 inches in size. It contains about 36 original photographs together with post cards, menus, newspaper clippings, and other pieces of memorabilia. A number of the photos appear to show several French officers visiting Gray in the United States, and there are photos of her wearing one of their tunics with her skirt. The passport was issued to permit Gray to travel to France in October of 1918. An interesting grouping to a woman who volunteered to serve in France with the Red Cross during World War I.