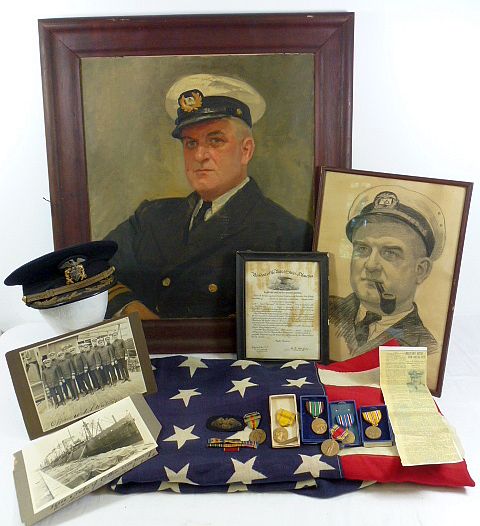 A large and exceptionally impressive group consisting of the medals and memorabilia of Captain Charles Richard Anderson, who served the United States of America as a Navy officer in both World War I and World War II.

Anderson, born in Canada, enlisted in the U.S. Navy in 1916. During World War I he served aboard two ships that were torpedoed by German U Boats, the troop ships SS Antilles and SS Finland. Immediately before and during World War II Anderson served as the Chief Engineer of the U.S. Navy Transport Mount Vernon, participating in operations in both the Pacific and European theaters. Between the wars Anderson was an officer of the United States Lines, serving as Chief Engineer aboard such noted ships as the SS George Washington and the SS America. Anderson died in Connecticut in 1957.

This historically significant group is comprised of the following items:

– A large oil portrait of Captain Anderson, in its original frame. The painting is 32 by 36 inches overall in the frame. The portrait was done on canvas, which was fastened to a board by tacks rather than a standard painting stretcher. In the portrait Anderson wears the uniform of a senior officer of a civilian shipping line.

– A charcoal portrait in the frame of Anderson, 14 1/2 by 20 1/2 inches in overall size. The portrait is signed “T.E. Stephens”, dated “9/27”, and again shows Anderson in the uniform of a civilian shipping line.

– Anderson’s blue wool visor cap as a Captain in the United States Navy. The size 7 cap has basket weave interior support construction; interior sweat shield marked by W.S. Mancke & Company of San Francisco; gold bullion oak leaves embroidered on the visor; and a sterling silver officer cap insignia. The visor shows use, but it is very clean, with no moth damage.

– A wool 48 star American flag, which is stenciled on the hoist edge “American Ensign”. Additionally, written on the hoist edge is “Goodall”, which is also written on one of the white stripes of the flag, and there is also a small cloth label sewn to the hoist edge that has “Goodall” printed on it. There is a faint stamp on the hoist edge that is not legible at this point. The flag has an interesting suspension system, comprised of a rope that runs through the hoist edge. One end of the rope has a loop while the opposite end has a wooden toggle that would be placed through the loop to secure the flag on the staff. Both the suspension rope and the designation on the flag of “American Ensign” indicate that this flag was of foreign manufacture. In fact, the “Goodall” was the name of a World War II British frigate that began life as the U.S. Navy destroyer escort USS Reybold. The ship, launched in July of 1943, was transferred to Great Britain just a few months later as part of the Lend-Lease program, and it became the HMS Goodall of the Royal Navy. Since Captain Anderson’s service in World War II took him to Great Britain, it seems that at some point he came into possession of this American flag from the Goodall’s flag locker. Perhaps his own ship found itself in need of a flag and the captain of the Goodall obliged? It is, in any event, a true World War II American ensign. The flag shows use, with a few relatively small holes, but the colors are bright and vibrant. The flag has separately sewn alternating red and white stripes, with a separate blue field on which the 48 stars are printed. The size is approximately 56 by 110 inches.

– Anderson’s framed commission as a Lieutenant Commander in the Naval Reserves, dated August, 1928. The document has discoloration to it, likely the result of the backing material inside of the frame bleeding through to the document itself.

– There are two large black and white photographs on cardboard, each about 8 1/2 by 12 inches in size. One of the photographs shows a group of USS Naval Officers and has a handwritten notation “Officers USS Westbridge New Orleans July 2nd 1919”. Anderson can very easily be seen in the front row of officers as a Lieutenant who wears three overseas chevrons on his uniform sleeve. The second photograph shows the Westbridge (which actually was named the “West Bridge”) at dock. There is some damage to the cardboard backing and so some of the caption is lost, but the handwritten notation reads “27,000 bales of cotton, 1,000 tons of ___ and lumber ___ cargo for New O[rleans].

There group includes a photocopy of a lengthy 1957 obituary of Captain Anderson, which sets forth details of his long service.

This is a superb and significant group from a courageous and accomplished United States Navy officer who sailed the seas of the globe in the service of his country in two world wars. The group is not only large in historic scope but also large in the number of items and their actual weight. For that reason the group will have a higher than usual shipping cost but that is necessary to keep this exceptional group together and complete. However, we will split the cost of shipping this group within the continental United States. (Just as a gauge, it is estimated that the maximum cost for ground shipment of the group in the Continental US would be about 160.00, which would mean that the cost of shipping to the buyer in that case would be $80.)