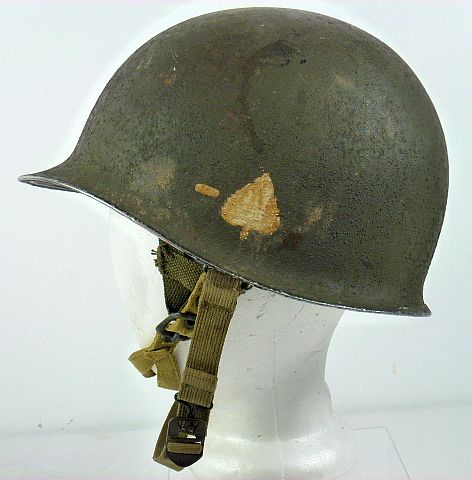 This is an original M1 airborne combat helmet that was apparently worn by two different paratroopers of the 506th Regiment of the 101st Airborne Division: from 1944 until the summer of 1945 by Private First Class Robert Fann, of H Company, 3rd Battalion, and, from the summer of 1945 until he brought the helmet home, Lieutenant Anthony Diffenbaugh of A Company.

The helmet is a front seam, fixed bail M1 combat helmet with a heat stamp of “769A”. The helmet strap is an early lighter khaki color with a brass, “raised bar” fastener. The liner is by Westinghouse, with darker olive drab “A” yokes with cast buckles. The cloth paratrooper chin strap is the first pattern example with five holes and zinc eyelets.

The helmet shell is dark olive green with cork finish, showing the expected wear to a helmet worn in combat, but the paint is largely intact. Each side of the helmet was painted with the white spade insignia of the 506th regiment, with a “tic” at the 9 O’ Clock position for the 3rd battalion. The spade emblems are approximately 1 1/2 inches tall and 1 1/4 inches wide at the widest points. One “tic” is 3/4 inches long, while the other is 5/8 inches long.

The leather head band of the liner has the name “Fann” written on it in ink on each side of the helmet. The interior of one segment of the right “A” yoke has the name “Tony Diffenbaugh” written lightly on it.

The only “Fann” in the 506th was PFC Robert Fann of H Company, 3rd Battalion, who made the jump into Normandy on D-Day with the 506th and jumped again into Holland with the unit during Operation Market Garden. Research indicates that Anthony G. Diffenbaugh was a replacement into the 506th, arriving in late June of 1945 after the war had ended. He was initially assigned to the Headquarters Company and, later, to A Company. He had previously served in the 501st Parachute Infantry Regiment of the Division. He remained with the 506th for only a relatively short time, since the Company Morning Report of 21 October 1945, states that Diffenbaugh had been released from his assignment with the company and assigned to the 2nd Reinforcement Depot. The logical presumption is that Fann was no longer with the unit by the time of Diffenbaugh’s arrival, or had become dispossessed of his helmet, and it was given to Diffenbaugh upon his arrival in the unit. Since the war had ended, Diffenbaugh evidently did not place a high priority on having an officer’s stripe placed on the rear of the helmet. He also did not bother to alter the Battalion “tic”, probably because he had begun with Headquarters Company, then been moved to “A” Company, and saw no point in altering the “tic”, if ever, until his assignment was more finalized. Regardless, Diffenbaugh evidently kept this helmet with him after leaving the 506th in the autumn of 1945, and he brought it home with him. It has remained in an untouched state sine 1945 and, having only recently been found, it has never been in a collection.