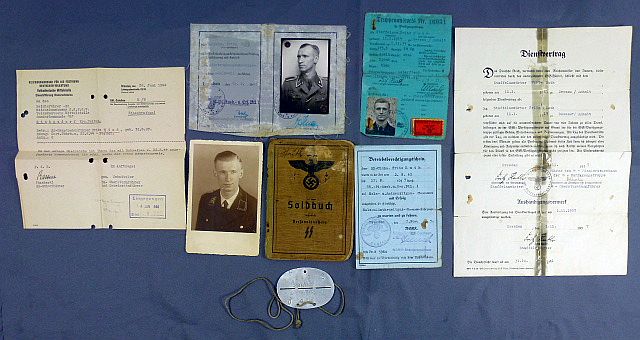 A group comprised of the SS soldbuch, additional documents, and identification disk, or “dog tag”, of SS NCO Fritz Huth. The group consists of the following items:

– SS soldbuch, issued in August of 1939, only shortly before the beginning of the Second World War. Huth was a member of the SS-VT (the SS Verfugungstruppe, the forerunner of the Waffen SS). An entry in the soldbuch of September 1, 1939, the day on which the war began, has Huth as a member of a pioneer unit (SS-Pioniersturmbann der SS-Verfgungstruppe). The inside cover of the soldbuch has a photo of Huth, then 22 years old, in field gray uniform with the rank of SS-Unterscharfuhrer, or junior squad commander. In the photograph Huth wears his SS enlisted ranks visor cap. The soldbuch reflects that during the war Huth was awarded the wound badge in black; the eastern front medal; and the War Merit Cross, 2nd class. The latest entry in the soldbuch is April 12 of 1945, and presumably Huth survived the war. The soldbuch certainly appears to have been carried by Huth from the beginning of the war to the end. The cover and contents are well worn. The cover has two file holes near the outside edge. Some of the interior pages have become detached from the binding, but the soldbuch is complete.

– Huth’s cloth SS-VT identification document (“Truppenausweis”)issued in November of 1937. The document identifies Huth as having blond hair and blue eyes, and born on January 11 of 1917. There is a small photograph of Huth attached to the document in which he wears the black Allgemeine SS tunic with brown shirt. He wears no rank collar tab, but he clearly is wearing an SS runes collar tab with the pick and shovel, the tab worn by the SS-VT pioneer units.

– Operating Permit issued in 1943 to Huth by the NSKK, Mobile Group Sachsen.

– Driver’s license (Fuhrerschein) on cloth, issued to Huth in 1943. The license features a large portrait photograph of huth in an open field gray tunic with dark shirt and tie. In his button hole are the ribbons of the Eastern Front medal and the War Merit Cross.

– A postcard size portrait photo of Huth from the pre-war period. He wears the black Allgemeine SS tunic with white shirt and tie, and the SS runes tab with pioneer insignia. his rank tab has alternating black and white piping and is blank.

– A large document, dated 1937, which is Huth’s contract as a member of a Pioneer Sturmbann of the SS-VT, with the rank of Staffelanwarter. This document was folded and has old cellophane tape down the center.

– A final document is a communication from Jine of 1944 regarding an SS senior sergeant named Fritz Wind. The document simply states that the requested “Kommandobuch” and red card were enclosed. The document does not appear to relate to Fritz Huth and the reason for its presence with Huth’s documents is not clear.

– Huth’s SS-VT identification disk, still on its original cord, which on one side carries the designation “SS Verfugungstruppe” and, on the other, his pioneer unit data.