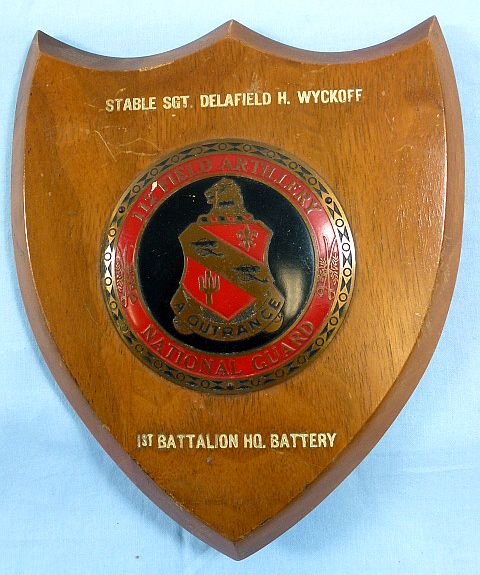 Service Plaque to a Stable Sergeant KIA in WWII

During World War II Wyckoff was a first lieutenant who was lost at sea and presumed dead on 18 July 1943. At the time of his death Wyckoff was assigned to 237th Ordnance Bomb Disposal Company (Provisional) and was assigned as the Bomb Disposal Officer for the 37th Infantry Division, which required a disposal officer for their planned assault on Munda, New Georgia Island. Wychkoff was aboard landing ship tank LST-342 (Boat Pool 8 based in the Solomon Islands) when it departed unescorted from Guadalcanal on 17 July 1943. Just before 0130 hours on 18 July 1943, the Japanese submarine RO-106, laid off Tokyo Bay on the islet of Ghavutu, west of Guadalcanal, Solomon Islands (Lat 09.03S Long 158.11E) fired a single torpedo towards the LST. The explosion blew the LST into two sections with the stern sinking immediately, carrying a majority of the ships passengers into the depths of Purvis Bay. The majority of the crew and passengers were below-decks owing to rainy weather. The bow remained afloat and was towed to Purvis Bay/Tokyo Bay off Florida Island and was beached so that useable equipment could be salvaged. There were 121 killed and 158 survivors from LST-342. 1LT Wyckoff was listed as killed-in-action at sea. The Navy Group commander was absolved from blame in the sinking, as the Navy had a shortage of escort craft. Wychkoff was posthumously awarded the Purple Heart Medal.