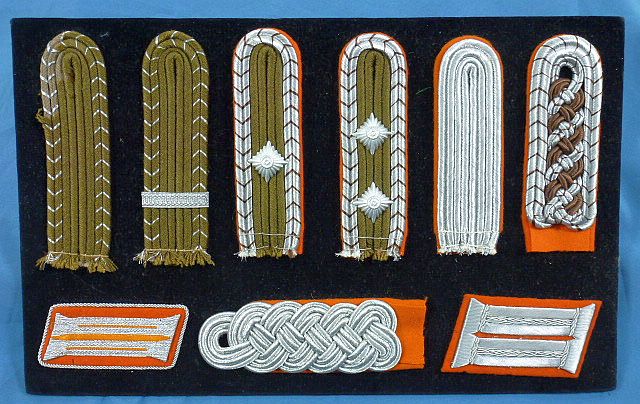 Salesman’s Sample Board of Gendarmerie Insignia

Third Reich salesman’s sample board from Gutmann & Company, on which is fastened (by loops of thread) 9 different pieces of insignia for NCO’s and officers of the Gendarmerie, the Third Reich rural police force. The insignia consists of 5 different single shoulder boards for NCO ranks; two officer shoulder boards for the two different levels of police officer ranks (one for ranks of Lieutenant through Captain, and one for ranks of Major through Colonel); and two collar tabs, one for NCO ranks and one for officer ranks. Each piece of insignia is in mint condition. Each piece of insignia is tacked to the black velvet covered sample board with loops of thread. The back of the board has multiple stamps of the Gutmann Company.