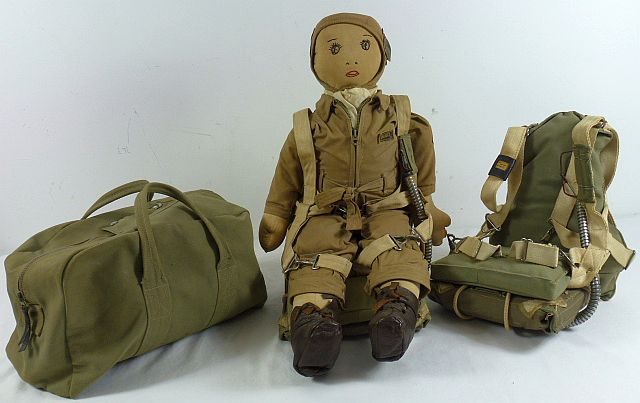 During the Second World War, “Dilbert” was as famous (or infamous) within the ranks of U.S. Naval Aviation as “Willie and Joe” were to the Army infantry or as “Kilroy” was to American service personnel around the world. “Dilbert” (or, to use his full name, “Dilbert Groundloop”) was the creation of Robert Osborn, an artist and member of the U.S. Navy Aviation Service. Osborn had aspired to become a Navy pilot but the Navy recognized his talents and placed him behind an artist’s drawing table rather than behind the joystick of a fighter plane. In this role Osborne (who would go on to became one of the most famous and acclaimed American political cartoonists of the 20th century) created “Dilbert Groundloop”, the hapless Navy pilot who was apparently oblivious to almost any safety practice or important flying skill as a pilot. If it was dangerous, or if it risked his airplane or the lives of his fellow pilots, Dilbert did it. As such, Dilbert quickly became a famous and indispensable figure in the training of Navy combat aviators. He appeared not only in training posters and flight instruction manuals, but in Life magazine and The New York times. In fact, Dilbert even became a real life flesh and blood aviator, portrayed by the actor Huntz Hall in the wartime U.S. Navy film titled “Don’t Kill Your Friends!”, an order that you wouldn’t think that you would actually have to give to a combat pilot (apparently, though, you did. In that film Ensign Dilbert actually ended up killing a civilian and three fellow servicemen. Hunts Hall himself had better luck in life, continuing with his film career and even ending up as one of the figures who is pictured standing behind The Beatles on the cover of the “Sergeant Pepper’s Lonely Hearts Club Band” album).

This extraordinary figure of Ensign Dilbert, seated with a parachute pack, was used to educate Navy aviators on the critically important methods of evacuating the cockpit and bailing out of a crippled plane (The Navy also used a machine that simulated the crash landing of a plane at sea, dropping pilot trainees into the water while they were seated in a simulated cockpit. Not surprisingly, the device was known as “The Dilbert Dunker”). This Dilbert figure is an absolutely extraordinary piece of detailed craftsmanship. Dilbert wears a separate one piece flying suit, complete with a leather “Dilbert” name tag. He sports a silk aviator’s scarf beneath the flight suit and he wears a cloth flying helmet on his head. His flying boots are actually leather with laces. His seat and parachute set are amazingly detailed. The seat parachute is even stamped with its military nomenclature: “U.S. Navy Parachute Type ‘S'”, and it is marked as having been assembled at the “Navy Job Order Department” at Pensacoloa. It is actually dated July 30, 1944. Dilbert has movable arms and legs (Well,he would have to, wouldn’t he, so you could put him in his seat and harness?), and he stands and impressive 23 inches tall (or he would stand an impressive 23 inches tall, if you stood him up, but Dilbert probably hasn’t left this cockpit seat since 1945). While he has a few spots here and there (and who among us doesn’t?), Dilbert is in superb condition for his age (and how many of us can say that?). The fact that this Dilbert figure survived is rather astonishing. Almost everything about his gear and his seat system became obsolete as new aircraft were introduced after World War II. By all odds, Dilbert should have ended up on the scrap heap with the planes of his era. Yet what is more astounding is not simply that this Dilbert survived, but that he did so with another complete seat and parachute set, contained within its own olive green carrying bag. The extra seat was obviously necessary for training and instructional purposes, and the fact that it has survived, in excellent condition, with Dilbert himself for all of these years, is nothing short of astounding.

All in all, this Dilbert figure represents a piece of U.S. Navy military aviation history that is both indisputably rare and truly important. There was an entire generation of U.S. Navy combat aviators who learned their wartime profession while watching an officer train them with the help of Dilbert. It appears that, in the case of this Dilbert, we even know who that officer was, for the spare parachute and seat set has a name tag on it: “Lt. Cmdr. Stilwell”, presumably the Navy Aviator who, with Dilbert’s assistance, trained many of the Navy’s World War II aviators.

As a final note, there is, of course, a very well known cartoon character of the present day named “Dilbert” and his creator, Scott Adams, unhesitatingly credits Robert Osborn’s World War II “Dilbert” as one of the inspirations for his own enormously popular character.

This Dilbert, with his flight gear and his extra flight seat and parachute, is quite simply an astonishing piece of World War II aviation history. His presence in a collection, whether it be the collection of a museum or of a private individual, will literally stop people in their tracks when they see him. He is an absolutely exceptional piece in every possible respect.