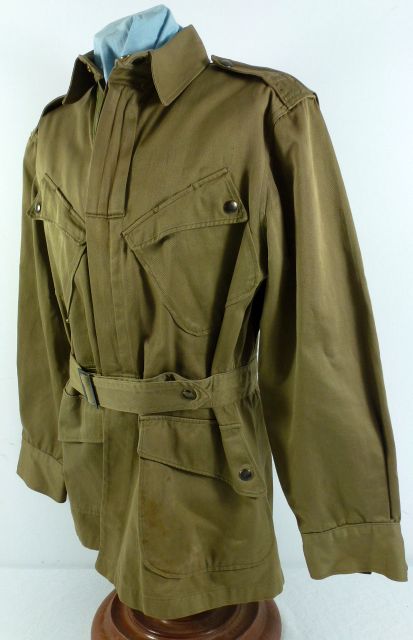 An exceptional example of a particularly rare piece of the World War II airborne uniform: The Model 1941 jump jacket. The four pocket, belted jacket is made from a light green cotton twill fabric with snap fasteners on the pocket flaps, collar, shoulders and belt, and Talon zippers. This was the first United States Army airborne jacket, designed in 1941 for wear by what was, at that time, a very small group of paratroopers. The Model 1941 jump jacket proved to need design changes almost immediately after it was introduced. One primary point that was altered with the 1942 jump jacket was the pockets. The 1941 jacket had simple “patch” pockets, each of which was covered by a flap which closed with a single snap at the far end of the flap. These patch pockets provided limited space for equipment and were altered in the design of the 1942 jacket. Additionally, the belt of the Model 1941 jacket was stitched to the rear of the jacket and utilized a snap fastener to secure the end. This belt design was altered on the Model 1942 jacket with a belt that was not sewn to the body of the jacket and which used a cloth loop on the belt to secure the end after it had been tightened. The few surviving example of the Model 1941 jump jacket seem to have two things in common: the absence of any Quartermaster issue tag, and the fact that they seem to have all belonged to officers. This jacket is no different. The jacket has no interior Quartermaster pocket tag and there is no indication that it ever had one. There are small marks on the shoulders that indicate that there was once officer rank insignia pinned to the jacket. Additionally, above the left upper pocket is a rectangular pattern of small stitch holes which indicate that the paratrooper who wore the jacket had a name tag above the pocket. He likely removed it and placed it on his M42 jacket when it was issued to him. The jacket is very clean, showing only minimal signs of use. There are some light spots on the bottom rear of the jacket and some spots on the front, primarily on the outside of the lower left pocket. If it were not for these few spots, the insignia marks on the shoulders, and the name tape stitching, the jacket would likely have been regarded as having never been issued. The interior upper back has the size stamp of “40” as well as the stamped designation of “86 A 88999”, the meaning of which is unknown.