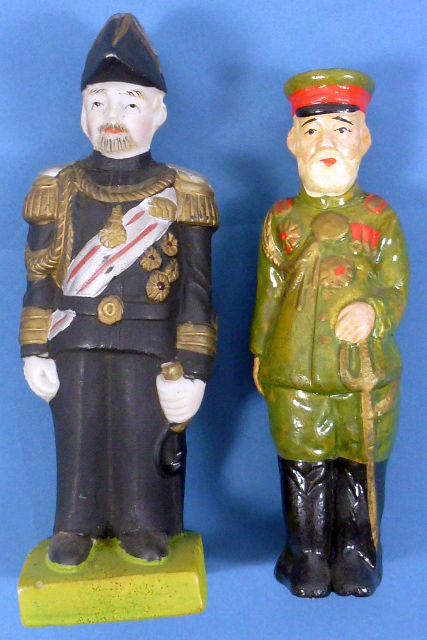 Two porcelain figures of the World War II period, depicting two of the greatest personalities of Japanese military history: Army General Count Nogi Maresuke and Marshal-Admiral Marquis Togo Heihachiro. Both were heroes of the Meiji era and achieved renown around the world, with Admiral Togo being termed by western writers as “The Neslon of the East”. The figure of Admiral Togo is 7 inches tall with a matte bisque finish. The figure of General Nogi is 6 1/4 inches tall with a gloss finish. Both of the figures are quite colorful, Admiral Togo is in excellent condition, General Nogi has a tight crack on his neck. The figures would have been found on display in Japanese homes during World War II as tributes to the military prowess of the Empire and its soldiers and sailors.