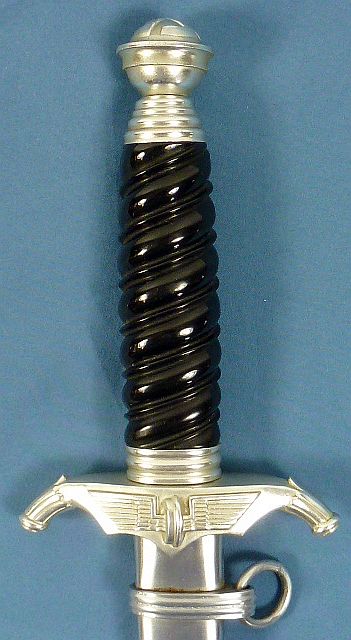 The second model officer dagger of the Bahnschutz, the Third Reich Railway Protection Police, which operated under SS control. This 2nd model dagger was introduced in 1937. This example is in near mint condition. The dagger features silvered aluminum pommel and crossguard while the scabbard is the steel style that was aluminum plated to match the fittings of the dagger. The blade has a darkly etched Eickhorn squirrel trademark. The blade is quite bright, with much visible crossgrain. The blade has a few spots and light scratches, but overall the blade is in exceptional condition. The leather washer remains in place at the top of the blade inside of the crossguard. The aluminum pommel top displays a sun wheel style swastika. The pommel itself has the typical light scratches and tiny indentations from carrying wear but, like the blade, it is in overall outstanding condition. The crossguard features the winged wheel insignia of the Railway Protection Police, and the wing on the viewer’s left exhibits the die flaw that is characteristic of the 2nd model Bahnschutz daggers produced by Eickhorn. There are a few light spots on the guard but the finish is completely intact. This is also true of the scabbard, which is straight and which is a fine and tight fit with the dagger. The scabbard has a few small spots and some verdigris about the scabbard carrying bands, but overall its condition is as impressive as the dagger itself. This is a scarce Third Reich dagger that was obviously worn, yet which remains in a beautiful state, and which exhibits near mint condition. It should also be noted that on this site is offered for sale a mint and unused example of the Bahnschutz officer’s dagger portepee. That porteppe did not come with this dagger, but the condition of that portepee would very nicely match this dagger once it was properly tied around the grip.