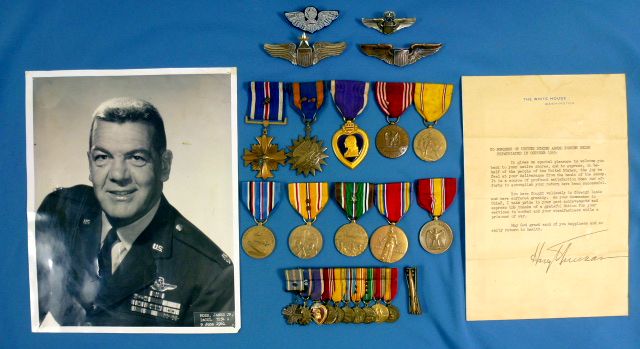 The medals, wings, and portrait photographs of Lieutenant Colonel James S. Ross, Jr., who flew combat missions as a bomber pilot in both Europe and the Pacific during World War II. In the spring of 1945, while flying as a pilot with the 498th Bombardment Group, 875th Bombardment Squadron, 20th Air Force, Ross became a prisoner of the Japanese and was held at the Ofuna Naval Interrogation Center and at the Tokyo Shinjuku POW Camp. The group is comprised of the following items:

There are two official Air Force portrait photos of Ross with the group, one being 8 by 10 inches in size and one being a smaller, 4 by 5 inch copy of the photograph. In the photograph it can be seen that Ross, in the rank of Lieutenant Colonel, wears the ribbons of the same medals and decorations in this group, with the exception that his ribbon set in the photograph also includes and Air Force long service medal. There is also in the group a letter from Harry Truman (with printed signature) that was given to returning prisoners of war. The letter has been pasted down on to a stiff cardboard backing.

The ribbons of the medals show some toning from age and there is a bit of verdigris on the pendant of the Distinguished Flying Cross. Overall the items are in very good condition.