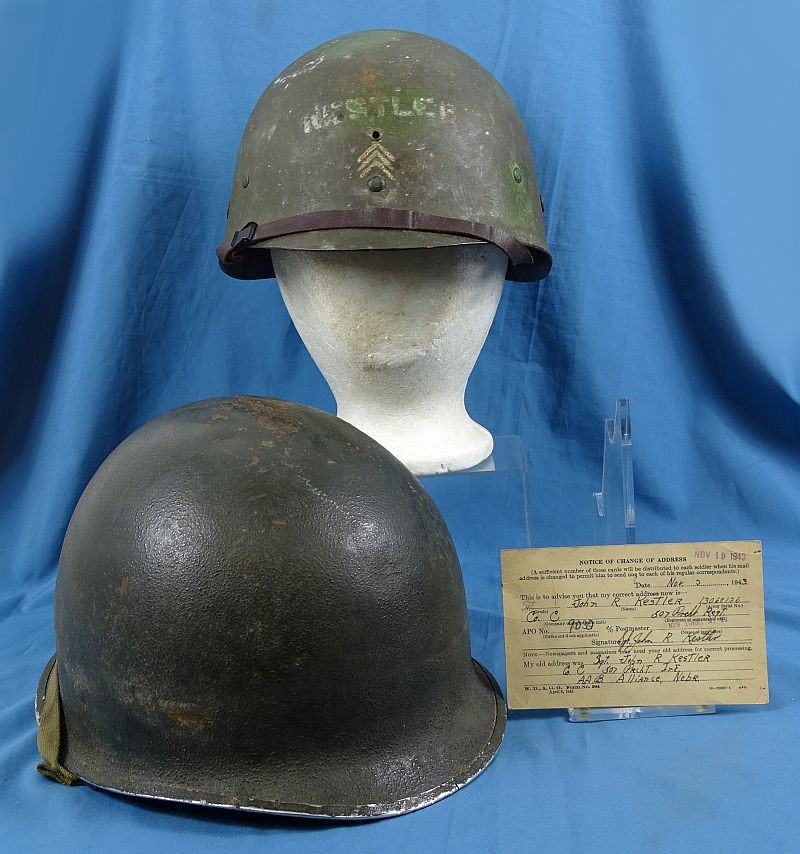 The exterior of the helmet retains approximately 90 percent of its cork infused, olive drab paint. The exterior shows minor indentations and spots of rust where the helmet has lost paint. The front interior of the helmet bears a heat stamp which appears to be “671B” (the photograph of the heat stamp that appears in this listing was taken after the application of baby powder to the interior, with the powder then being removed). The full fabric helmet chin strap is in place across the back of the helmet. The liner of the helmet is a Firestone example. The internal webbing of the liner is intact, and the liner chin strap is present. The liner has an olive drab exterior that was daubed with spots of lighter green paint to create a camouflage pattern on the liner. The front of the liner bears a painted Sergeant rank chevron below the painted name of “Kestler”. This was “John R. Kestler” of Pennsylvania, who served in World War II as a paratrooper with the 507th Parachute Infantry Regiment of the 82nd Airborne Division. The helmet is accompanied by a War Department “Notice of Change of Address” postcard. The postcard was Mailed by Kestler to his parent on November 19, 1943, and he informed his parent that his address was now in care of an APO in New York. On the postcard he identifies his unit as Company “C” of the “507 Parcht. Regt.”. Kestler’s obituary appears online and it states that “Jack graduated from Johnsonburg High School and enlisted and proudly served our country in the U.S. Army during World War II. He was a graduate of the 82nd Airborne Division of Company C, 507th Parachute Infantry Regiment and jumped in the Normandy Invasion on June 6, 1944. He was captured by the Germans and held as a Prisoner of War for nearly nine months before being liberated by the Russians. He was discharged as a Staff Sergeant after 3 1/2 years of service. He was a member of the 507 Airborne Association, which he was active with until his death”. It should be noted that, on D-Day, Kestler’s drop zone would have been behind Utah Beach in the area of St. Mere-Eglise. The helmet and postcard are accompanied by copies of information from the internet consisting of Kestler’s identification as a D-Day paratrooper from the website “American D-Day” and a photograph of Kestler from the 507th P.I.R. section of a website on World War II airborne history.