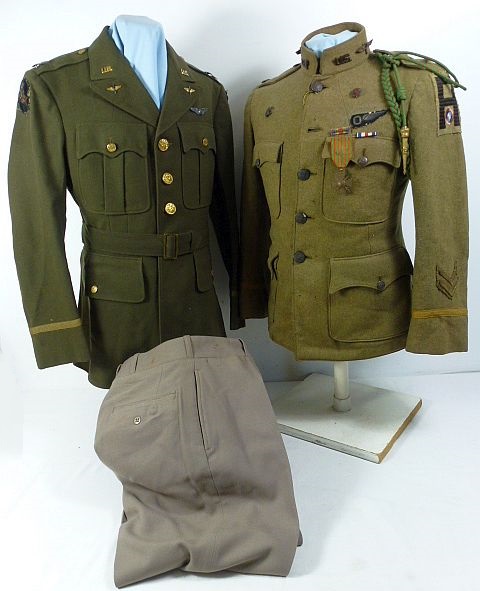 A group comprised of the World War I and World War II uniforms, World War I squadron pins, and French Croix de Guerre medal, of Alexander Grier, who served as an Army Air Service observer in France in World War I and who was credited with two aerial victories. One of these victories came while serving with the French Escadrille C-46 (the “C” denoting that the squadron flew the Caudron aircraft, likely one of the Caudron bomber or reconnaissance planes); and Grier’s other aerial victory coming in September of 1918 while serving with the American 90th Aero Squadron. Grier later served in World War II as an officer in the 14th Air Force in the China Burma India theater and the group includes his named 14th Air Force “pinks and greens” uniform.

The group is ex Bob Ford Collection, with the uniforms and insignia having been acquired by Mr. Ford directly from Alexander Grier. The group consists of the following items:

– Grier’s World War I Army Air Service officer’s tunic. The tunic bears the tailor labels of Clemons clothiers on 39th Street, Broadway, New York City. The collar bears the “U.S.” officer insignia as well as a set of French made winged propeller insignia of an officer of the Army Air Service. On the left shoulder is the embroidered wool patch of the Army Air Service in the First Army. The lower left sleeve carries two gold bullion overseas service stripes. There are 2nd Lieutenant rank bars on the shoulder as well as a fourragere for the French Croix de Guerre. On the left breast is sewn an Army Air Service Observer wing, embroidered in toned bullion on black wool exhibiting some wear to the black wool backing. The French Croix de Guerre decoration, with the reverse dated 1914-1918, is pinned to the uniform with the typical French two prong attachment system. Pinned above the medal is the ribbon for the American World War I Victory Medal, with a remarkable 8 battle stars. Also sewn to the tunic is the ribbon for the Silver Star decoration. This was obviously added to the tunic by Grier after the war, following the institution of the Silver Star decoration in 1932. The award was certainly based on the award to Grier of a Silver Citation Star during the war, probably resulting from his credit for two aerial victories. Also pinned to the jacket are Grier’s two World War I squadron pins. One is the pin of the French squadron C-46, a cut-out bronze pin with an open catch on the reverse, the entire pin being about 3/4 of an inch in diameter. The second pin is that of the American 90th squadron, which features a cut-out “90” with enameled dice showing the lucky number “7” (the dice showing lucky 7 had been the personal aircraft insignia Lt William G. Schauffler Jr., commander of the 90th, when he had flown with the 1st Aero Squadron, and it was adopted as the unit insignia of the 90th). The reverse of this pin is marked “Sterling” and it has a drop in safety catch. The pin is approximately 11/16 of an inch in diameter. This uniform also includes Grier’s two First World War dog tags, impressed “Alexander Grier USA” on one side and “2nd Lt. USAS” on the other. The interior pocket label is named to “Alexander Grier”, and bears the notation “9/10-16.5 35”, indicating that the jacket was originally tailored on September 10 to fit an officer who had a 16 1/2 inch neck and a 35 inch sleeve. The jacket is in very good service used condition. The collar had two hook and eye closures, but both of the hooks are now gone. One button is missing from the front of the tunic. The wool jacket has several of the typical small holes, none of which are particularly noticeable at all and they do not detract from the appearance of the uniform.

– Grier’s World War II “pinks and greens” officer uniform, jacket and pants. The jacket carries a set of Captain’s rank bars by Amcrsft (unmarked as such, but with the distinctive Amcraft “snowflake” pattern backs). There are “US” and winged propeller officer insignia on the lapels. Above the left pocket is an Army Air Force Observer wing, pin back, marked “Sterling”. This is a 2 inch wide wing usually associated with wear on the uniform shirt. The left shoulder bears a bullion theater made China Burma India Theater patch while the right “combat” shoulder patch is a theater made silk and bullion patch for the 14th Air Force. The interior pocket label is named “A.T. Grier Capt. AUS”. On the lower left sleeve of the jacket are two World War I bullion overseas stripes and two World War II bullion overseas stripes. The waistband of the pink wool officer trousers have the handwritten notation “ATG-0382”, for Grier’s name and partial service number. There are also several other numbers or letter/numbers combinations written or stamped into the interior of the trousers (these are likely tailoring or lot numbers, since they are made up of a letter and five numbers, instead of the letter and four numbers format that was used by an individual as a laundry mark). The “pinks and greens” uniform is in very good condition.