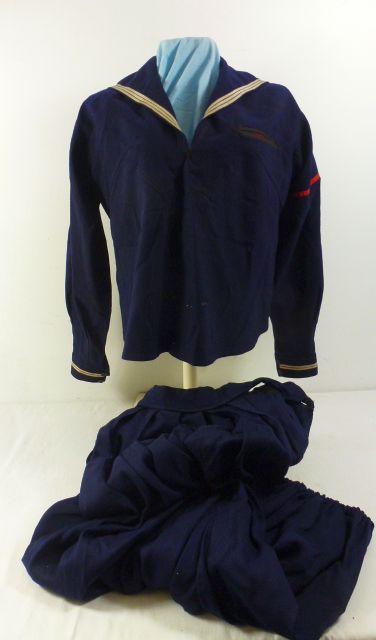 A blue wool Navy style jumper and blue wool pantaloons that were made from a skirt. The jumper has a Navy style rate on the right sleeve, being a hand embroidered eagle over a fouled anchor. The jumper has a number of moth holes in the front. There is an interior label to a Naval uniform tailor. The pantaloons were at one time a long pleated skirt that matched the jumper. The skirt was modified by cutting it in the center and sewing the sections together to form two legs, to which elastic was added at the bottoms of the legs. There is a name tag of “Mary
G. Steel” sewn in to the pantaloons. The fouled anchor insignia was used during the period of World War I as the emblem of Naval Militia, and it may well be that the uniform was tailored for Miss Steel at a time when she was a member of such an organization on a Federal or State level.