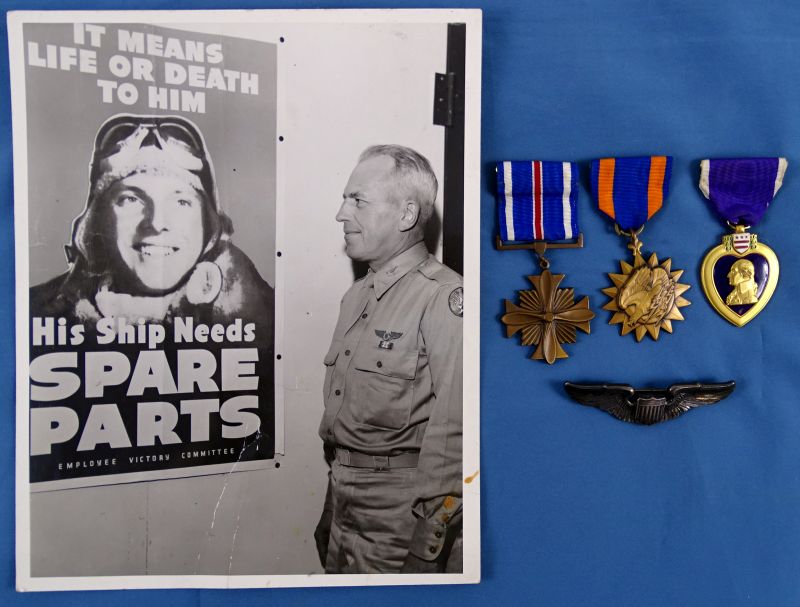 The group is comprised of the posthumous decorations of 1st Lieutenant Horace L. Borden, Jr., a P-47 Thunderbolt fighter pilot of the 311th Fighter Squadron, 58th Fighter Group, of the Fifth Air Force. Lieutenant Borden went missing in action on December 26, 1944, during a mission in the Philippine Islands. In accordance with the military’s “year and a day rule” for personnel missing in action, Lieutenant Borden would have been officially declared as killed in action as of December 27, 1945. He is memorialized on the “Wall of the Missing” at the American Military Cemetery in Manila, Philippine Islands. Lieutenant Borden’s father, Major Howard L. Borden, Senior, was also an Army Air Force officer. Major Borden had served as an Army Air Service Observer in World War I and had been the recipient of the Distinguished Service Cross for extraordinary valor while on a combat mission in 1918. The group is comprised of the posthumous decorations of Lieutenant Borden:

– Purple Heart, slot brooch suspension, officially hand engraved in script on two lines “Horace L. Borden / Jr. “. The Purple Heart was named by an engraver at the Philadelphia Quartermaster Depot whose hand is well known to historians of World War II American decorations. This engraver, who apparently began his work late in World War II and continued into the post war period,  utilized a fine script style for the naming of a medal. Additionally, when engraving a Purple Heart which was being awarded to a member of the Army Air Force, the engraver added a stylized winged propeller emblem below the naming. That was done by the engraver on Lieutenant Borden’s Purple Heart, and he did this in a highly artistic fashion by which the letter “J” in Jr.” was brought down to create the winged propeller emblem.

All of the medals are in excellent condition.

The group also includes a solid back, sterling silver, full size 3 inch pin back pilot wing. Finally, the group includes an official Army Air Force photograph, 8 by 10 inches, with the stamp on the reverse of the Army Air Force base at Big Spring, Texas. The photo has no caption, but research has established that the photograph shows Lieutenant Borden’s father looking at a wartime production poster emphasizing the need for the production of airplane parts. The poster shows the face of an airman in flight gear and it proclaims “It Means Life or Death to Him”. The airman pictured on the poster was in fact Major Borden’s son, Howard L. Borden, Jr. It is unknown at this time whether the poster was produced before or after Lieutenant Borden went missing. In the photograph Major Borden wears the wing of an aerial Observer above the ribbon of the World War I Victory Medal.

This listing includes a photograph of a front page newspaper article which appeared in the “Big Spring Daily Herald” on February 2, 1945. The article reports that Lieutenant Borden had been reported as missing in action. This article was found through internet research and a hard copy of the article is not included with the medals, wings, and photograph.