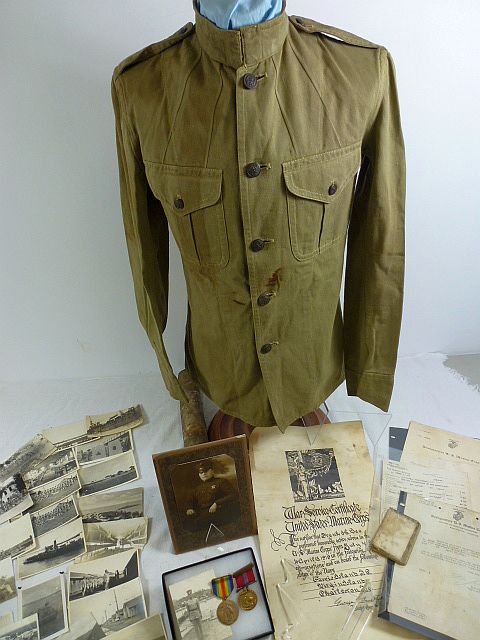 A group of medals, photographs, diary, documents, and a uniform tunic that belonged to Frank H. Lee of Michigan, who served in the United States Marine Corps during World War I from July 5, 1917 to April 15, 1919, with duty stations that included Parris Island, South Carolina; the U.S. virgin Islands; and Charleston, South Carolina. The group is comprised of the following items:
– Lee’s World War I summer uniform tunic, light forest green cotton with Marine Corps buttons. The tunic is stamped inside with is name stamp of “F.H. Lee”. The tunic has a number of spots and stains and there is a blue line that runs about halfway down the back of the tunic. It remains, however, quite presentable.
– Lee’s medals: his World War I Victory Medal and his Marine Corps Good Conduct Medal, numbered on the edge “No. 29622”.
– Lee’s diary: The diary is a small notebook, 2 1/2 by 4 inches. It is well worn and was obviously carried by Lee continuously throughout his service as a Marine. It begins in late June of 1917. In his entry for the Fourth of July he records that he was that day sworn in as a U.S. Marine. The diary ends one year later, in July of 1918. The same name stamp of “F.H. Lee” that is in his uniform tunic is inside the cover of the diary.
– Large World War I Marine Corps Service Certificate in the original mailing tube. The certificate is approximately 11 by 18 inches. The tube in which the certificate was kept obviously became wet at some point, so there is staining to the certificate and the tube. However, much of the staining on the certificate would be covered if it was matted for display. The certificate records Lee’s service during the war at Parris Island, the Virgin Islands, and Charleston.
– Lee’s award document for his Good Conduct Medal, dated September 13, 1920. The document bears the number 29622, the same number on Lee’s Good Conduct Medal. Additionally, the document comes with the original letter transmitting both the Good Conduct Medal and the award document to Lee, and the transmittal letter states that he is being sent Good Conduct Medal number 29622.
– A portrait photograph of Lee in the wool Marine Corps uniform, approximately 4 1/2 by 6 1/2 inches in size, in the photographer’s studio display card.
– 28 black and white photographs, most in post card size, and most all have notations on the back by Lee. One photograph is 3 inches by 4 inches and shows Lee wearing the uniform tunic that is a part of this group. his written notation on the back is “Frank H. Lee, St. Thomas Virgin Islands of U.S.”, and is dated July 27 of 1918. The other photographs show Marine Corps training or group shots, and also show Lee’s service in the Virgin Islands.