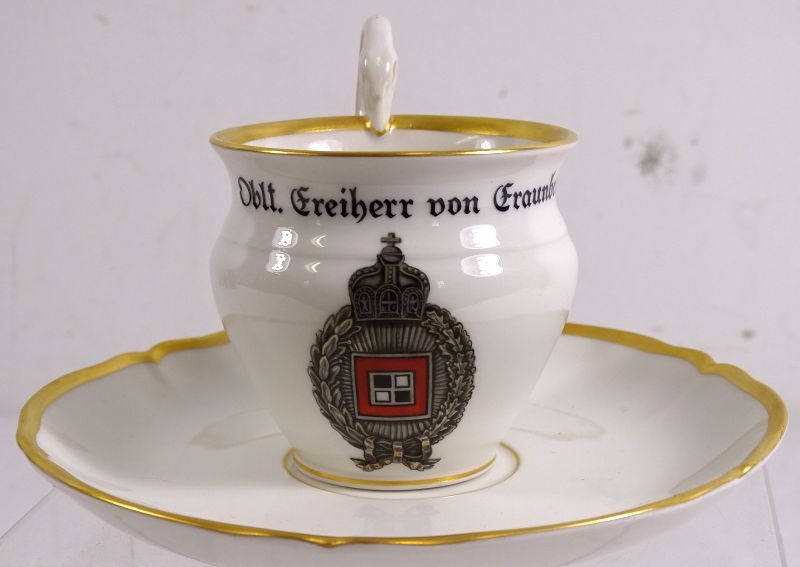 Both the cup and saucer on the bottom bear the mark of an Iron Cross and the mark of the prestigious porcelain manufacturer KPM (for “Königliche Porzellan-Manufaktur Berlin”, or “Royal Porcelain Factory in Berlin”). The cup bears a color image of an Imperial German Air Service Observer badge. Above this is “Oblt. Freiherr Von Frauberg”. Internet research reveals that Oberleutnant Freiherr Von Frauberg served in the elite Royal Bavarian Infantry Lifeguards Regiment (Königlich Bayerisches Infanterie-Leib-Regiment), and a photograph was found on line depicting Von Frauberg with other officers of the regiment. The photograph is captioned: “The staff of the III Battalion, Inf.-Leib-Rgt. at the Red Tower Pass [1916]”, with “Lieutenant Freiherr von Frauberg” seated on the right. This photograph is included in this listing, but a hard copy is not included with the cup and saucer. Presumably, Von Frauberg served as an infantry officer and was then trained as an observer in the Imperial German Air Service. The cup and saucer are in excellent condition, with gilt trim to the edges.