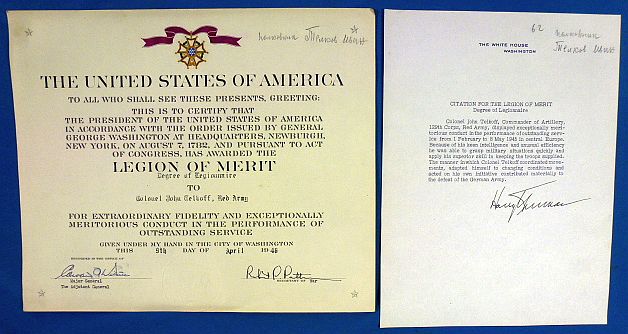 Legion of Merit Award Documents to a Soviet Colonel

The Legion of Merit document is approximately 10 by 12 inches. It is dated April 9, 1946, and it bears the original signatures of the U.S. Army Adjutant General, Major General Edward F. Witsell, and Secretary of War Robert Patterson. It carries the embossed seal of the United States Army. The recipient’s name is written in pencil in Russian near the top edge, and the way in which it is written in the original Russian makes it clear that the use of the name “John Telkoff” reflects an slightly imperfect transliteration of the Colonel’s name from Russian to English. The document has a few minor ripples near the bottom edge but overall it is in very good condition.

The official citation for the award is on watermarked stationary with the raised designation of “The White House Washington”. Beneath the typed paragraph setting forth the basis for the award is the large, bold, original signature of President Harry Truman. The document is approximately 8 by 10 1/4 inches in size. As with the award document, the citation document has the recipient’s name written in Russian in pencil near the top edge, as well as the penciled number “62”. The document is in excellent condition.