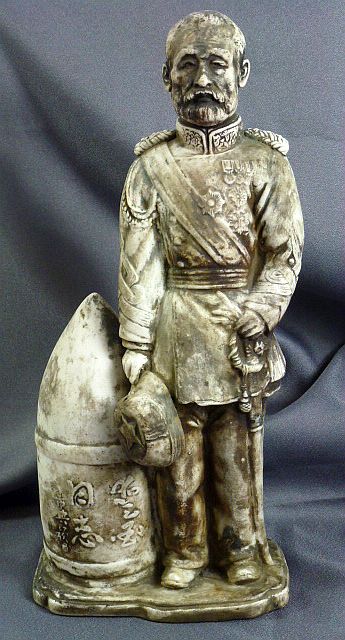 A large and nicely detailed porcelain figure of General Nogi Maresuke, a national hero of Imperial Japan. The statue is approximately 10 3/4 inches tall by 5 inches wide by 3 1/2 inches deep. The figure was executed in white porcelain and then given an application of a dark finish that brought out details in the figure and which the manufacturer undoubtedly intended to give the statue something of an antique marble look to it.

From Wikipedia: “Count Nogi Maresuke, also known as Kiten, Count Nogi (25 December 1849 13 September 1912), was a general in the Imperial Japanese Army and a governor of Taiwan. He was one of the commanders during the 1894 capture of Port Arthur from China. He was a prominent figure in the Russo-Japanese War of 190405, as commander of the forces which captured Port Arthur from the Russians. He was a national hero in Imperial Japan as a model of feudal loyalty and self-sacrifice, ultimately to the point of suicide. In the Satsuma Rebellion, he lost a banner of the emperor in battle, for which he tried to atone with suicidal bravery in order to recapture it, until ordered to stop. In the Russo-Japanese War, he captured Port Arthur but he felt that he had lost too many of his soldiers, so requested permission to commit suicide, which the emperor refused. These two events, as well as his desire not to outlive his master (junshi), motivated his suicide on the day of the funeral of the Emperor Meiji. His example revitalized the Japanese tradition of ritual suicide.”