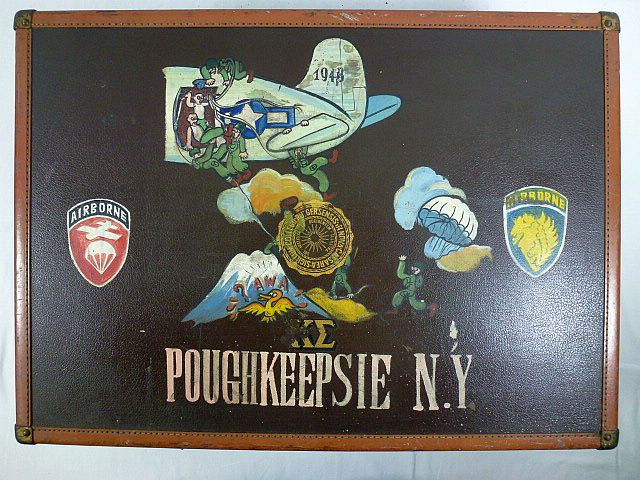 A large, hard body leather suitcase that was elaborately painted for an American paratrooper. The case is approximately 25 inches wide by 18 inches tall by 7 1/2 inches deep. The case is painted on one side with the comical image of paratroopers tumbling out of an airplane. There is a date painted on the tail of the plane which is either “1943” or “1948”, the actual date being difficult to identify conclusively due to a scratch of the paint. Painted on the same side are the shoulder insignia of the Airborne Command and the 13th Airborne Division. The name of the town of Poughkeepsie, New York, is painted on the lower edge. A decal of Rutgers University was applied to the center area of the side, along with the decal Greek letters representing the Kappa Sigma fraternity. On the top of the suitcase is painted the term “Parachute Maintance [sic] Co.”. The opposite side of the suitcase is painted with the designation “U.S. Paratroopers” above a large painted paratrooper wing. The wing is flanked by painted representations of the shoulder insignia of the 11th and 82nd Airborne Division. Below the wings is a red panel on which the name “Robert E. Pink” was painted (the name seems to have faded or been painted over but it is still quite readable). This side of the suitcase also features decals for Rutgers University and the Kappa Sigma fraternity.

The U.S. Army enlistment records available on line identify only one “Robert E. Pink” as an enlistee of the World War II period. According to those records, Pink, who was born in 1926, resided at Dutchess, New York (which is very close to Poughkeepsie) and in November of 1945 he enlisted at Fort Bragg, North Carolina, with Army Serial Number 42168544. It appears that Robert Pink served as an Army paratrooper in the period immediately after the end of World War II and for several years thereafter. When he was discharged from the Army he carried this suitcase to attend college at Rutgers. The suitcase is in very good condition.