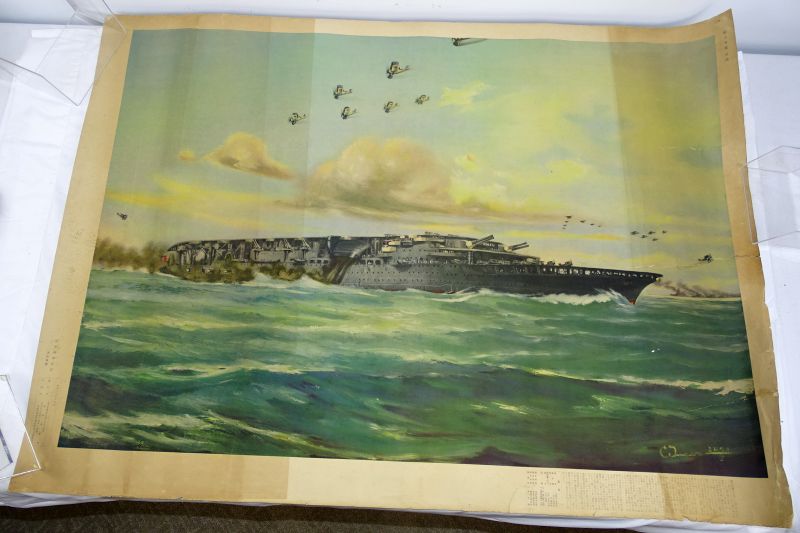 The print appears to depict either the carrier Zuihō or the carrier Shōhō. The print is approximately 30 3/4 by 42 1/2 inches in size. The print shows some spots and an area of discoloration, and the edges have been reinforced with paper tape on the back. The colors of the print remain bright and the print itself is an impressive depiction of naval combat in the early twentieth century. As to the Zuiho and Shoho, both ships were originally built as submarine tenders, but were subsequently converted into carriers. Completed in early 1942, Shōhō supported the invasion forces in Operation MO, the invasion of Port Moresby, New Guinea, and was sunk by American carrier aircraft on her first combat operation during the Battle of the Coral Sea on 7 May. Shōhō was the first Japanese aircraft carrier to be sunk during World War II. Zuihō played a secondary role in the Battle of Midway in mid-1942 and did not engage any American aircraft or ships during the battle. The ship participated in the Guadalcanal Campaign during the rest of 1942. She was lightly damaged during the Battle of the Santa Cruz Islands during this campaign and covered the evacuation of Japanese forces from the island in early 1943 after repairs. Afterwards, her aircraft were disembarked several times in mid to late 1943 and used from land bases in a number of battles in the South West Pacific. Zuihō participated in the Philippine Sea and Leyte Gulf in mid-1944. In this last battle, Zuihō mainly served as a decoy for the main striking forces and she was finally sunk by American aircraft, thereby fulfilling her task.