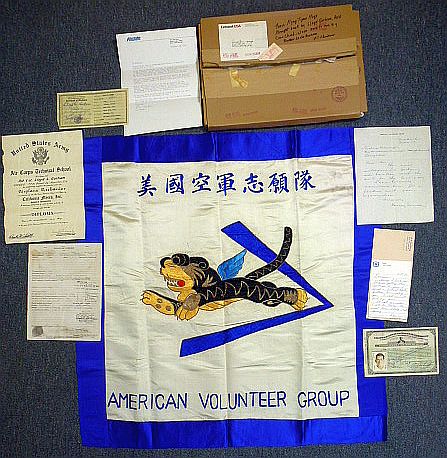 A large, Chinese made silk banner of the American Volunteer Group, the famed “Flying Tigers”, together with original documentation of AVG volunteer Lloyd L. Gorham, who brought the banner home from China. Gorham was an aircraft Crew Chief in the 2nd “Panda Bears” Squadron of the AVG.

Lloyd Gorham. from Walla Walla, Washington, enlisted in the United States Army on January 19, 1940. He was trained as an airplane mechanic but, shortly after he was graduated from the Army Air Corps Technical School in May of 1941, he was discharged from the Army “for the purpose of accepting employment with CAMCO.” The “CAMCO” referred to on his Army discharge was the “Central Aircraft Manufacturing Company” in China, a business that was created by William Pawley, the China sales representative of the Curtis Wright Aircraft Company. CAMCO served as the covert recruiter of the pilots and technical personnel who formed the American Volunteer Group.

The group consists of the following items:

– A large, hand made, silk and bullion banner, 32 inches wide by 33 1/2 inches long. The banner features the iconic “Flying Tiger” emblem above the designation “American Volunteer Group”. The tiger is positioned below a row of Chinese kanji which, translated, reads “American Air Arm Volunteer Group”. The banner has some relatively light spots from age and storage, but the colors are striking, the embroidery is superb, and the overall appearance is absolutely magnificent.

– An original letter on “American Volunteer Group” stationary, handwritten and signed by Harvey Greenlaw, a civilian who served on the Headquarters Staff of the AVG. The letter is dated “July 12”, without a year, but it was obviously written at the time that the AVG was disbanding, since it is captioned as having been written in New Dehli and it is addressed to the Factory Manager of the “Hindustani Aircraft Manufacturing Co.” of Bangalore [India]. The letter reads “Dear Sirs: This will introduce L.L. Gorham who has been with the A.V.G. for the last year. I can honestly recommend him for a position with your organization. Sincerely, Harvey Greenlaw”. The letter is approximately 8 by 10 inches in size and is in excellent condition.

– An original graduation diploma document of the “United States Army Air Corps Technical School”, dated May 17, 1941, attesting to Lloyd Gorham’s completion of the course in Airplane Mechanics. The diploma gives Gorham’s rank as Private first class and his assignment as the 77th Pursuit Squadron at Hamilton Field. The document has two horizontal folds and is a bit tattered on one side. What undoubtedly happened here was that the diploma was folded and placed into an envelope and mailed to Gorham after he had completed the course. Upon receipt he tore off one end of the envelope to open it and inadvertently tore off a bit of one side of the diploma. The document is approximately 9 by 11 3/4 inches.

– An official “duophoto direct copy” of Gorham’s discharge from the United States Army, sealed between two sheets of clear plastic. Stapled to the document is an original affidavit bearing the signature and seal of a Washington State Notary Public. The affidavit is dated April 4, 1945, so it was obviously made for Lloyd Gorham himself before the end of the Second World War. The document is double sided and indicates that Gorham served as an airplane mechanic, with his enlistment beginning on January 19, 1940, and his discharge taking place on June 25, 1941. One side of the document states that Gorham was discharged “Per par. 1, SO #156, Air Base, Hamilton Fld. Calif. June 25/41. See AR 615-360, Ltr. AGO 6/21/41 file AG 220/81, (6/21/41) EA.”. All of this almost (intentionally) indecipherable bureaucratic language is clarified on the opposite side of the document, which states under “Remarks” that Gorham was “disch[arged] for the purpose of accepting employment with CAMCO.” As of June of 1941 Gorham had been in the Army for only about a year and a half, and the government had certainly invested considerable time and money in training him as an airplane mechanic. Yet he was being discharged well ahead of the end of his enlistment for the ostensible purpose of accepting an employment offer from a private company. This document clearly reflects the American Government’s role in making selected qualified military pilots and aviation crew mechanics available to form the American Volunteer Group.

– The group includes an original document issued by the “United States Department of Commerce, Bureau of Marine Inspection and Navigation”. The document is a “Certificate of Identification” (5 by 7 3/4 inches) and it designates Gorham as a “Qualified Member of the Engine Department”. The certificate is dated August 24, 1943, and attached to it is an identification photograph of Gorham. The group also includes a “Certificate of Discharge” given to Gorham by the Department of Commerce. It pre-dates the identification certificate, being dated April 29, 1943. The document indicates that Gorham served as an Ordinary Seaman on board the merchant steam ship “SS James Gordon Bennett”, a Liberty Ship that had been built by the Maritime Service in 1942. The Discharge indicates that Gorham served on the ship from December 28, 1942, when it left Colombo, Ceylon, until his discharge on April 29th, 1943, at Savannah, Georgia. With the disbandment of the American Volunteer Group in July of 1942, its members became American civilians overseas. Apparently, Gorham made his way back to the United States by serving as a seaman on board the Liberty Ship. Maybe Gorham was actually rendering services as a sailor on this voyage. Alternatively, maybe this “service” was simply the means by which the American government arranged for the return to the United States of the “civilians” who had volunteered to fight in China.

– The group includes a short, handwritten note dated June 17, 1984, and a typed letter dated December 18, 1984, both from Les Gorham, the brother of Lloyd Gorham. They were written to the collector who had acquired this banner (together with a smaller, identical example of the same banner) from Les Gorham. The handwritten note refers to Les Gorham sending the collector both Lloyd Gorham’s discharge and the Department of Commerce Certificate of Identification. The longer, typed, letter from Les Gorham provided the collector with a brief biography of his brother Lloyd. Among other things, the letter states that Lloyd Gorham had been an engineer for the Federal government Highway Division before he joined the American Volunteer Group. The letter refers to Lloyd having served in the Merchant Marine and the fact that he “was in pain due to the shrapnel in his back”, although the letter does not explain where or how Lloyd suffered these wounds. The letter states further that Lloyd died in the spring of 1955 from internal hemorrhaging and was buried in Walla Walla, Washington.

– A square flat box, bearing a 1984 postmark, in which this banner and its smaller companion were stored. There is a handwritten statement on the box: These Flying Tiger flags brought back by Lloyd Gorham, AVG Crew Chief, were sold to me by brother Leslie Gorham”, and the statement is signed by the collector who acquired the banners from Les Gorham.

Between pilots, ground crew, and support personnel, there were only about 300 men in the American Volunteer Group. Yet despite their small number the AVG achieved immediate worldwide fame, being portrayed in the popular media of the day as modern day swashbucklers of the skies, as patriotic mercenaries who were risking their lives to fight Japanese aggression when the United States was not yet involved in the war. Together this banner and the accompanying documents comprise an absolutely extraordinary artifact from one of the most legendary and celebrated organizations in military history: The Flying Tigers.