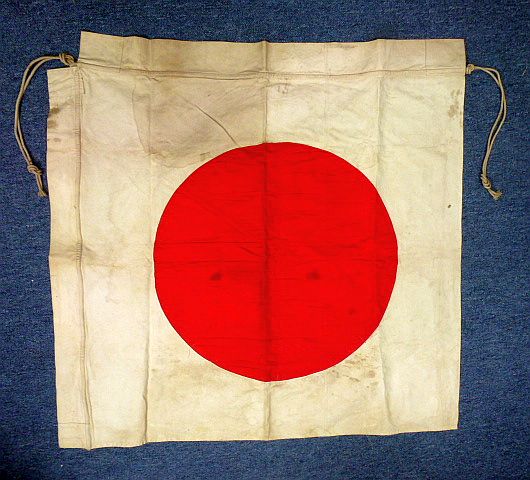 A very scarce example of the World War II period Japanese national flag in the configuration of a field commander’s flag. Rather than being rectangular, as a conventional flag would be, this flag is square, being 33 inches by 33 inches. Along the top edge of the flag and on the hoist edge there are 3 inch wide sleeves, with securing cords. The flag was intended to be positioned on a staff that also had a horizontal extension out from the top of the pole. This horizontal rod would have been placed through the sleeve on the top of this flag so that, when carried on the field by the commander’s staff, the flag was fully open and visible, and it was held in that open and displayed position by virtue of the construction of the flag and its placement on the staff. The flag is heavy cotton material with separately sewn red suns on each side. The cords for securing the flag to the staff are present and attached to the flag. The flag has some spots from field use but it is quite impressive and in overall very good field used condition.