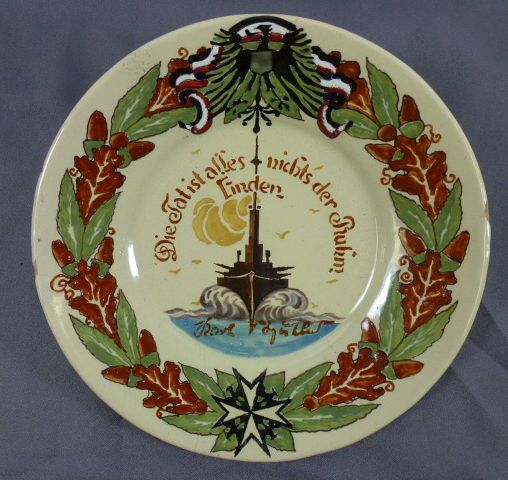 A glazed pottery plate, about 9 inches in diameter, commemorating the Imperial German Kriegsmarine light cruiser Emden. The center of the plate features a bow-on image of the Emden with the declaration “Die Tat ist Alles nichts der Ruhm” (a line from the play “Faust”: “The deed is all; the glory is nothing”). The plate is surmounted by an Imperial German eagle while at the bottom of the design is an outline of the Pour le Merite, the highest military award of Prussia (Karl Friedrich Max von Muller, the Captain of the Emden, was awarded to PLM for his service on the Emden). Beneath the image of the Emden is what appears to be a signature as a part of the design. The first name of the signature looks to be “Karl”, and it may well be a representation of the signature of the ship’s Captain. The plate has the expected age cracks and very minor chips, primarily to the glaze itself. The plate is sound and intact. The reverse has two holes molded into the plate so that it could have been hung and displayed by someone such as a veteran of the crew.