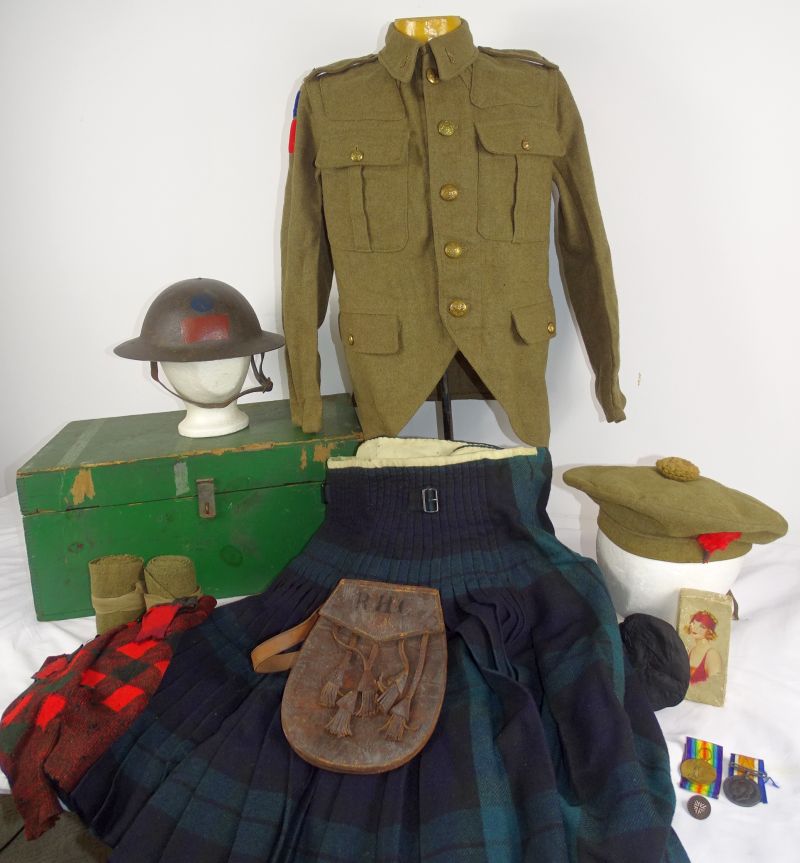 -Uniform jacket in brown wool, with the jacket having the distinctive swallow tail front that was worn only by those soldiers who wore kilts. Both sleeve bear the insignia of the13th Battalion, being a blue circle above a red rectangle. On the collars are the brass battalion insignia of a “C” over the battalion number of “13”, and the shoulder carry the brass unit insignia of “RHC”. The interior of the jacket has the initials “EWC” written in two locations. The remnants of the paper military contractor’s label are present, and the interior also carries the British Broad Arrow issue mark. The upper left sleeve has a small hole, but otherwise the jacket is very clean, and without stains, tears, holes, or tracking.

-The wool uniform kilt in the distinctive Black Watch tartan of very dark blue, black and green. The kilt has a pleated front section, with two buckles in front and two leather straps on the ends of the kilt for securing the kilt around the waist. The kilt has some scattered, and relatively small, holes which are located on the section of the kilt that  would have been worn in the rear and which are not distracting. The interior of the kilt retains remnants of the military contractor’s label.

-The red and black Argyle pattern socks with garters, as well as a pair of brown wool puttees.

-The leather sporran pouch on full strap, with the sporran cover flap bearing the impressed unit designation of “R.H.C.”.

-Castledine’s combat helmet, which on the front bears the painted unit insignia of a blue disk and red rectangle, with the blue disk showing a bit of paint loss. The exterior combat paint is largely intact. The liner is present, though loose. The leather chin strap is present and intact.

-Castledin’e medals, being the World War I British War Medal and the World War I Victory Medal. Both medals are officially impressed on the edges with “2075630 Pte. E.W. Castledine 13-Can. Inf.” The medals are with their ribbons and the original paper envelopes. They were placed into a period paper box with a lid displaying an attractive young woman of the “Flapper” style.