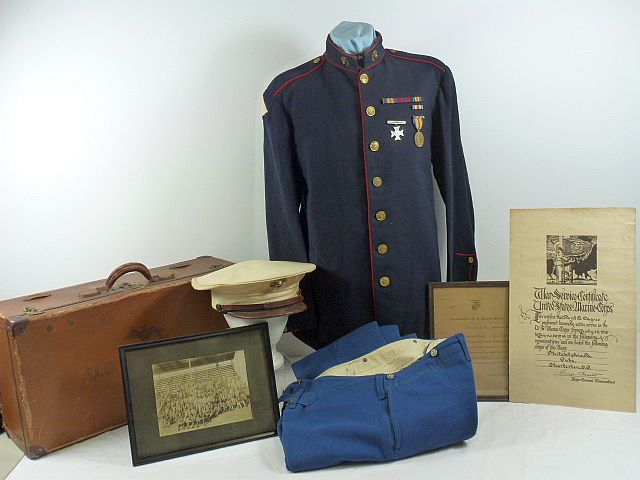 A large grouping that consists of the uniform, medals, documents, photographs, and memorabilia of Paul Bartram Dague, who served in the United States Marine Corps during the First World War and who subsequently served for 20 years as a member of the United States Congress from Pennsylvania. This group is comprised of the following items:

– Dress Blue Uniform and Cap with Medals: The uniform is a Marine Corps dress blue enlisted tunic with pants as well as white top visor cap. The tunic has on it Dague’s Victory Medal, marksmanship award, and ribbon bar. The blue wool tunic has an interior size stamp of “7-M”, and a Marine Corps Quartermaster stamp with the dates of 1922-23. The collar displays enlisted eagle, globe and anchor insignia. The collar has two hook and eye closures, although one “eye” is missing and the other has detached from the collar. On the tunic is Dague’s World War I Victory Medal and his Marine Corps “Sharpshooter” award. Above these is a single Victory Medal ribbo bar, as well as a three place ribbon bar wih the ribbons for the Victory Medal, the Marine Corps Good conduct Medal, and the Pennsylvania Medal for World War I Service. On the right shoulder of the tunic is the large white wool diamond patch on a dark blue backing, reflecting honorable discharge from the Marine Corps. The uniform trousers are the light blue wool worn with the dress blue uniform. They are internally stamped size “7-S”, with a Marine Corps Quartermaster stamp and the date of 1918. Both the tunic and pants are quite clean and in very good condition.

The date of “1922-23” inside of the tunic presents an interesting question regarding Dague’s Marine Corps service. The available online sources about Dague, as well as the documentation with this group, reference his Marine Corps service has having taken place in 1918-1919. However, those same sources then pick up Dague’s history as a member of Pennsylvania government in 1925. It therefore seems entirely possible that, upon completion of his initial World War I enlistment in 1919, Dague reenlisted in the Marine Corps and served into the early 1920’s. However, the materials in this group also reflect that Dague was particularly active in post-war veteran activities, and especially in the American Legion. It is possible that, after the war and while engaged in these activities, Dague acquired a dress blue tunic to wear for occasions that warranted it. An interesting component of this is the fact that Dague was from Chester County, Pennsylvania. Another resident of Chester County was Horace Pippin, a noted African American artist of the primitive, or folk art, school, who was himself a veteran of World War I and who was active in the Black American Legion post in Chester County. In 1937 Pippin painted a portrait of Paul Dague, and a copy of the portrait appears in this listing. It can be very clearly seen that in that painting Dague wears the Marine Corps dress blue uniform that is a part of this group, down to the white top visor and the shooting award and ribbon bar on the jacket (Interestingly, Horace Pippin also did a portrait of another Chester County resident and Marine Corps veteran: General Smedley Butler, who was the recipient of two Medals of Honor). Ultimately, further research might be conducted to determine whether Dague extended his Marine Corps service into the 1920’s but, that research notwithstanding, this uniform was without question that of Paul Dague. This entire grouping comes from the collection of noted World War I collector Bob Ford, who obtained the grouping directly from Paul Dague himself.

The uniform includes the white top visor cap worn with the dress blue uniform. The cap has interior basket weave construction, and an enlisted eagle, globe, and anchor cap emblem. The white top is somewhat soiled and could used a cleaning, and the stitching on the interior leather sweatband is missing from about half of the band, although the sweatband itself is complete and intact. The brown leather chin strap across the front of the cap is broken near one side but both pieces remain present.

– Documents and Photographs: The group includes Dague’s large Marine Corps Service document, 11 by 18 inches, attesting to his Marine Corps service in World War I in Cuba and the United States; the 1919 award document for the Good Conduct Medal; a framed Marine Corps unit photograph, 6 by 8 inches, from the World War I period; and numerous other photographs that depict post-war veteran activities or which relate to Dague’s service in the United States House of Representatives in Washington. All of the documents are in good condition, although the framed certificate for the Good Conduct Medal has toned to a brown color due to the acidic nature of the material that was placed behind it in the frame.

– Other Memorabilia: The group also includes a World War I canteen in its cover; A khaki cloth toilet articles kit, which is empty, but on which is drawn a very well executed eagle, globe and anchor, along with “U.S.M.C.” and “P.B. Dague 158 Co. 1st Regt.”; and a “Khaki Komfort Kushion”, an inflatable seat cushion in a cloth khaki pouch that appears to date from the period of World War I; and Dague’s suitcase, in which much of the material of this grouping was stored for many decades. The suitcase is 8 by 12 by 23 inches in size. One side is decorated with the eagle, globe and anchor and “U.S.M.C.”, while the other side has the decoration of “Paul Dague First Regiment Marine Corps”.

A large and very complete group for a Marine of World War I.