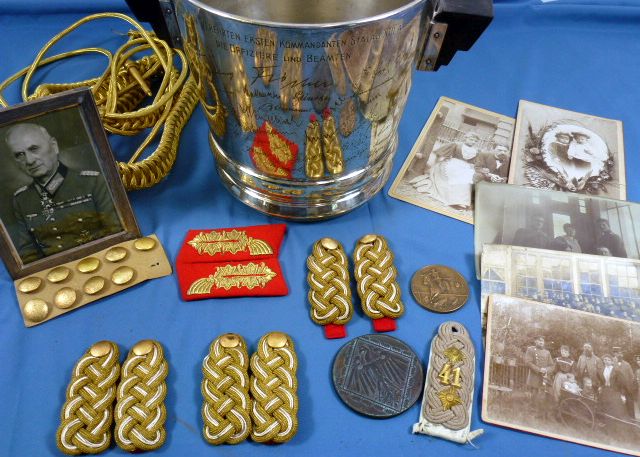 An extraordinary group comprised of the insignia and memorabilia of World War II German Army Major General Georg Haeublein. General Haeublein’s military service began in 1894. He served as an officer during World War I during which he was severely wounded and was decorated with the Iron Cross first class, the Turkish Gallipoli Star, and multiple other awards. Following the war he entered into the service of the Nuremberg Police, rising to the rank of Colonel by 1939. With the outbreak of the Second World War he returned to the army and served as the first Commandant of Stalag XIII-A. He remained Commandant until September of 1940 when he became the commander of Military District A in France, a position in which he served until April of 1941. Thereafter he served as Commander of prisoners of war in Romania and Senior Quartermaster in the Black Sea area until his entry onto reserve status in January of 1942. He retired from military service in August of 1943 and died in Germany in 1952.

The group consists of the following items:
– A large presentation silver plate champagne or wine bucket, maker marked by the firm of F.W. Quist Metallwaarenfabrik in Esslingen. The bucket is engraved “To Our Revered First Commandant Stalag XIII A From the Officers and Officials”. There are then approximately 40 signatures engraved beneath the dedication. The bucket has a bottom diameter of 6 1/2 inches and is 8 1/4 inches tall.
– Three pair of bullion shoulder boards for an Army General. Of the three sets, two are slip on style and one is a pair to be sewn in to the uniform.
– A set of gold bullion collar tabs for an Army General.
– The gold dress aiguillette of a General.
– A portrait photograph of Genral Haeublein in uniform, within a silver frame, 4 1/2 by 5 3/4 inches in size.
– 9 gilt buttons for the uniform of an Army General.
– A single shoulder board for the white summer tunic, the board being that of an Oberst in the 41st Regiment.
– A 1929 table medal for an event of the 7th artillery regiment, 2 inches in diameter.
– A 1927 table medal commemorating the 75th anniversary of the Nuremberg Museum.
– 5 original photographs, two of which appear to be from the period of the
First World War, each about 4 1/2 by 6 inches in size.
All of the items in the group are in very good condition. The presentation wine bucket shows tarnish and some typical wear to the silver plate in spots. The shoulder boards and collar tabs appear to be in essentially unused condition.