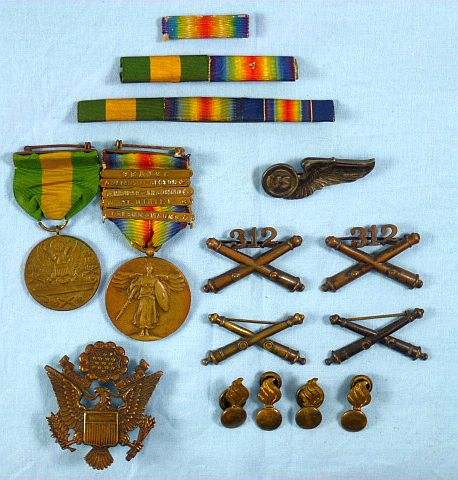 The exceptional medal and insignia group of Henry Anthony Yearsley, who served as an enlisted man in the Army Field Artillery on the Mexican Border, was commissioned as an officer, served in France with the 79th Infantry Division and while there was qualified as an aerial observer in the Army Air Service.

– Yearsley’s Federal Mexican Border Medal, wrap brooch, numbered on the rim “19475”.
-World War I Victory Medal. This is an interesting medal in that Yearsley modified the clasps. The medal has the bars, from the top down, for France; Defensive Sector; Meuse-Argonne; St. Mihiel; and Aisne-Marne. The battle clasp combination was more than the 79th Division was entitled to and reflects Yearsley’s participation in those campaigns as an aerial observer. Apparently Yearsley was unaware that the “France” clasp was only to be worn by personnel that had been in France without participating in combat, and he added it to his Victory Medal himself.
– 1919 Aerial Observer half wing, pin back with open “C” catch, and which from its patina appears to be unmarked sterling silver.
– Artillery officer collar insignia, one set being for the 312th field Artillery, and the second set being unnumbered.
– Two sets of Ordnance officer collar insignia, one set being unmarked screw back insignia, the other set being screw back and marked by Amcraft.
– An Army officer visor cap eagle.
– A single Victory Medal ribbon; a two place ribbon bar with ribbons for Mexican Border Service and the World War I Victory Medal, from which a device has been lost; and a three place ribbon bar with ribbons for the Mexican Border Service Medal, the World War I Victory Medal, and the Pennsylvania World War I Service Medal. The two place ribbon bar has a label on the reverse identifying it as a product of the George Studley Company.

The group is accompanied by copies of research materials. These include several pages from two Planchet Press publications on the Mexican Border Service Medal, which identify medal 19475 as having been awarded to Yearsley. The other documents are Yearsley’s records from the Pennsylvania War History Commission, and they include Yearsley’s handwritten account of his service, from the Mexican Border through his discharge in 1919, including his service as an Aerial Observer after training in France in 1918.

All of the items are in very good used condition, and reflect the fact that the medals and insignia were indeed worn by Yearsley. He obviously took great pride in his record of service, going so far as to modify his Victory Medal with the addition of the “France” bar, so that there could be no mistake about where it was that he saw combat. The medals and insignia were likely worn on multiple Armistice Day celebrations through the years following 1918.