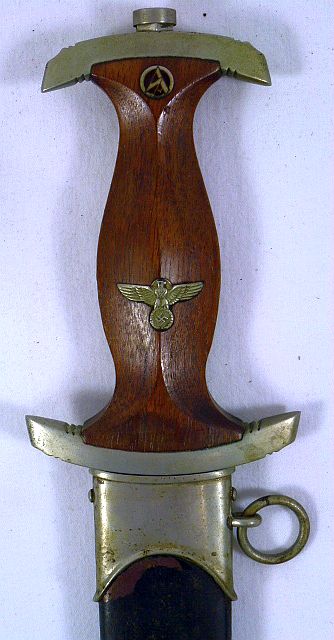 An early SA service dagger by Wilhelm Kober, from which the Ernst Rohm dedication was removed. Additionally, the original owner evidently joined the NSKK but, rather than purchase a new dagger, or even simply a new scabbard, the owner instead gave the anodized brown scabbard a coat of flat black paint. The reverse of the dagger crossguard is marked “He”, indicating SA group Hessen. The removal of the Rohm inscription on the reverse of the blade was well done, and left the Kober firm trademark unaffected. However, the Rohm inscriptions included a horizontal line above Rohm’s last name. That line was intended to represent the umlaut over the “o” in “Rohm”, and the end of this horizontal line still remains on the reverse of this blade. The “Alles fur Deutschland” motto remains dark. The blade exhibits the typical runner marks as well as some “pepper spots”, but overall the blade is in very good condition. The nickel guards are uncleaned. The grip is a light wood with very nice grain.The grip eagle is the nickel style which, like the guards, is uncleaned. The SA runes button shows some wear to the silvering but the enamel is without chips or cracks. The grip itself shows minor indentations from carrying wear but it is also free of chips or cracks. The scabbard is straight and without dents, but the ball is heavily dented. The fittings are uncleaned. There is some wear to the black paint that the owner applied to the scabbard, and the visible brush strokes in the paint indicate that this was clearly a “home conversion” by the SA man to create a dagger that would be acceptable when he wore his NSKK uniform. It may be that he was unwilling to spend the money on an NSKK dagger, or it may be that he had a personal attachment to the SA dagger that had been given to him with the Ernst Rohm dedication, and he was unwilling to relinquish it when he began serving in the NSKK. Overall a very interesting and historic dagger in very good untouched and uncleaned condition.