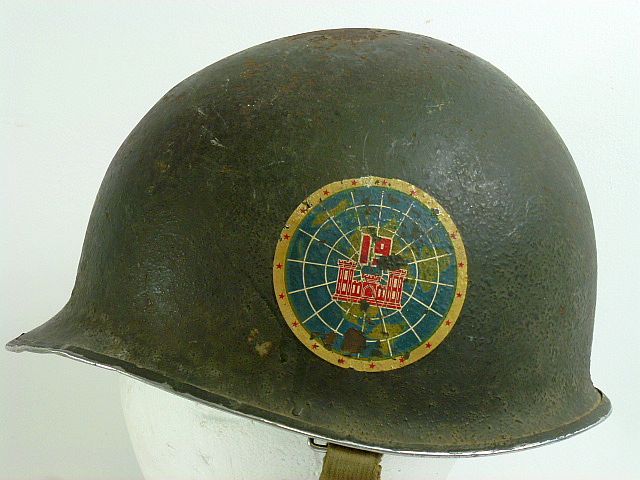 An absolutely remarkable untouched and uncleaned World War II M1 combat helmet that was worn in Europe by a member of the 19th Combat Engineer Regiment. The helmet is an early front seam, fixed bail shell with an equally early liner that has the lighter, khaki web interior. It is impossible to determine the manufacturer of the liner because the interior of the liner remains caked with dirt that, in all likelihood, originated in Italy. Similarly, the heat stamp of the shell is concealed beneath a layer of undisturbed grime that has been in place for more than 70 years. On the left side of the helmet shell is the large decal of the 19th Engineer Regiment, 3 inches in diameter. The exterior, cork-infused, green paint is approximately 75% intact, with the primary wear being on the top of the shell. The green web chin strap remains attached to the fixed bails. The interior of the shell shows all of the effects of the uses to which the M1 helmet was put in the field, which included utilization for cooking and “helmet baths”. The helmet liner has the same 3 inch decal located on the right side of the liner. The liner has a crack of about 1 1/2 inches in length on the front and is lacking the liner chin strap.

The 19th Combat Engineer Regiment participated in constant, heavy fighting in the European Theater. They landed with the first waves of the invasion in North Africa and, in the disaster at Kasserine, it was the men of the 19th Engineers who formed the nucleus of the force defending the Pass. They subsequently fought in Sicily and in Italy, carrying out one of the most intense combat assignments in the history of the European Theater when, during the battle at Casino, the 19th Engineers built bridges over the Rapido river in open terrain and while under heavy enemy fire. The unit earned an extraordinary 7 campaign streamers during the war, for Algeria-French Morocco (with invasion arrowhead); Tunisia; Sicily; Naples-Foggia; Rome-Arno; North Apennines; and the Po Valley. The story of the men of this unit can be found on line in a documentary titled “The 19th Engineers No Longer Exist”.

A truly exceptional, “one look” American combat helmet of the Second World War.