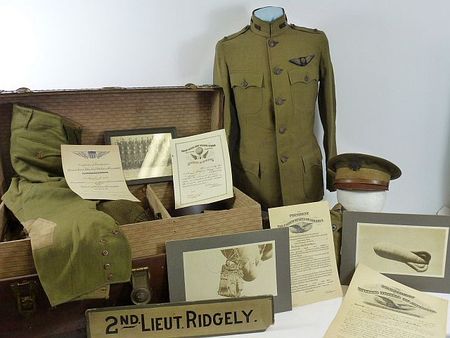 An astonishingly large group comprised of the uniform, manuals, documents, photographs, equipment, and even the personal trunk, of Army Air Service Lieutenant Arthur O. Ridgely, who was Spherical Balloon Pilot Number 355 and who, during the war, served as an instructor at Camp John Wise, a training field for the U. S. Army Balloon Corps.

The uniform of Lieutenant Ridgely consists of his tunic, two pair of breeches, visor cap, leather gaiters and leather waist belt. The uniform tunic is in excellent condition, with Army Signal Corps collar insignia and bullion lieutenant bars on the shoulder. The left breast displays the superb pin back, bullion, wing of an Army Air Service Balloon Pilot. The breeches (one pair of which have exterior leather calves, as riding style breeches) show wear and use but remain in good overall condition.

The group also includes a wealth of material in the form of manuals, books, several large photographs, and documents, all of which relate to Ridgely’s military service as a Balloon Pilot. These documents include Ridgely’s Army commission and two different certificates of graduation from the Army Air Service Balloon School, one being for the “Ground Course” and the other being his certification as a graduate of the Balloon Pilot course, the completion of which earned him the stunning wings that are on his uniform. Apparently Ridgely’s skills as a balloon pilot were so significant that, rather than being deployed out of the country, he was made an instructor at the Army Balloon School at Camp John Wise.

It certainly seems that Ridgely must have been something of a “pack rat” while in the service, given what are literally stacks of papers and books in this group. There is far too much to list in detail, but one item is illustrative of the material: a 1918 War Department check, payable to Ridgely, in the Amount of thirteen cents! Apparently Ridgely couldn’t be bothered to cash the check, but he saved it nonetheless. It has to be assumed that this official U.S. Government check, now 99 years old, is no longer valid, of course, but it is a rather remarkable piece of ephemera in and of itself, and it actually represents the amazing rarity of the entire group in microcosm: just as a complete, named World War I Army Balloon Pilot uniform is exceptionally rare, so too is an actual un-cashed U.S. Government War Department check from the First World War. From its largest pieces to its smallest, this, then, is an extraordinary group.