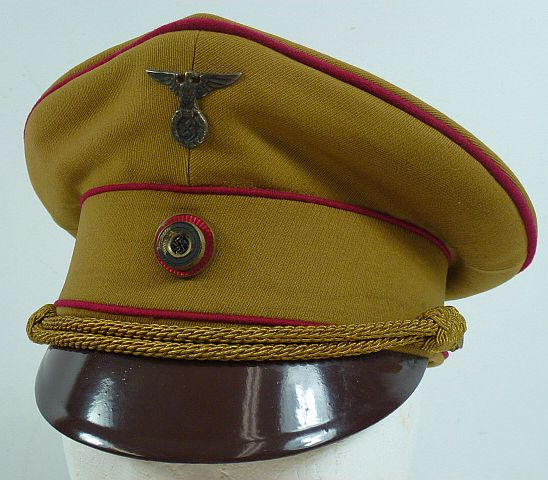 A very fine example of the visor cap worn by a political leader, or Gauleiter, in the early days after the Nazi assumption of power. The cap is constructed of a golden brown whipcord wool material for both the top and cap band. The band and crown are piped in the red color used to denote an official at the Gau level. The visor is crossed by a gold bullion cap cord. The cap band displays a 1935 pattern enamel political cockade while the peak of the cap displays a 1927 pattern eagle. The interior is lined in beige artificial silk and is marked as a size 55. The full diamond-shaped celluloid sweat shield is intact, as is the leather sweat band. The cap has some light exterior spots and it shows internal signs of having been worn, but it remains exceptionally clean and in very fine condition.