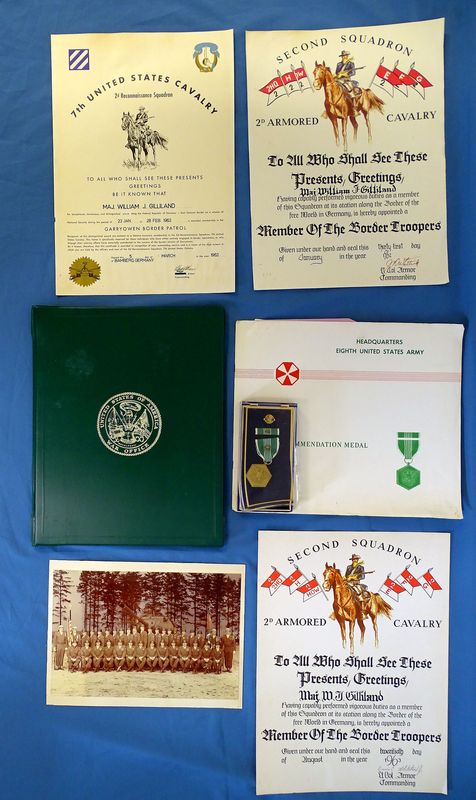 A group comprised of the cased Army Commendation Medal with oak leaf cluster, award document, and additional presentation documents and photographs, of armored cavalry officer William Gilliand. The materials, and in particular a photo of Gilliand wearing his ribbons, indicate that he served in combat in World War II in both Europe and the Pacific as an enlisted man and after the war as an officer of armored cavalry. The group consists of the following items:
– Army Commendation Medal with oak leaf cluster, unnamed as awarded, in the clear presentation case (The plastic case was apparently placed close to a heat source when it was packed away and has experienced some warping of the lid). The medal was awarded to Gilliand in 1968 during his service as an armored officer serving as Chief Operations Officer of the Operations Division of the Headquarters of the U.S. Eighth Army in Korea.
– A very unusual and large presentation folder for the Army Commendation Medal from the Eighth Army, containing the award citation for the medal and the formal award document.
– Two large color presentation certificates, 11 1/2 by 16 inches, dated 1962 and 1963, attesting to Gilliand’s service as an officer with the Second Squadron of the 2nd Armored Cavalry, serving “along the border of the Free World” in Germany, and identifying him as a “Member of the Border Troopers”.
– A large presentation document, 11 by 16 inches, dated March of 1963, from the U.S. Army 7th Cavalry, identifying Gilliand as a member of the “Garryowen Border Patrol” for service on the East-West German Border “on a mission of National Security” from 23 January to 28 February, 1963.
– A large color photograph, about 9 by 12 inches, depicting officers of the 2nd Armored Division, including Gilliand in the rank of Captain. His ribbons can be seen to include the Bronze Star, the Purple Heart, and ribbons for service in World War II in both Europe and the Pacific, as well as service in the Korean War. On his left “Combat Unit” shoulder he wears the patch of the 2nd Infantry Division, presumably the unit with which he had last served in combat in Korea.
– A large U.S. Army presentation folder containing a “Certificate of Appreciation” and a “Certificate of Retirement”, both named to Gilliand as a Lieutenant Colonel in 1970.
– An 8 by 10 inch black and white photograph of Gilliand with two other senior officers.

All of the items are in very good condition. The documents contain both Gilliand’s Army service number and his birth date, allowing further research to be conducted on this career combat officer. An impressive group to a two war combat veteran who served on the German Border during the Cold War with two famed cavalry units.