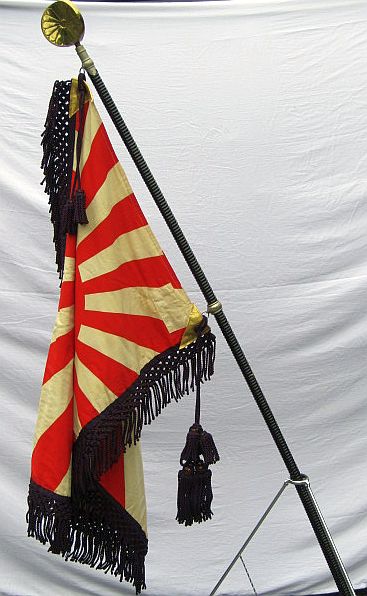 An item of singular importance that could well be described as one of the rarest pieces of Japanese militaria in existence and, beyond that, a piece that is quite likely one of a kind: the complete and cased regimental flag of a unit of the Imperial Japanese Navy or Naval Landing Forces.

Every Japanese regimental flag was a personal presentation to the unit from the Emperor, as reflected by the fact that the pole top finial bore the royal Chrysanthemum and the heavy, braided fringe on each flag was royal purple in color. At the end of the Second World War an order was issued that all regimental flags were to be completely destroyed in order to prevent these Imperial possessions from being captured. This order was carried out. As such, there are simply no World War II Japanese military regimental flags known to exist…aside from this one. This example was found in Japan, and it appears to have escaped the destruction process solely because it was never actually presented to a Japanese Naval unit. In the lower corner of one side of the flag, next to the hoist edge, is a separately applied white cloth rectangle. This is the place on the flag where the Emperor himself would have written the designation of the unit that would receive the flag. On this flag that cloth rectangle is still blank, indicating that the flag was never presented to an Imperial Naval unit. After the flag was created and the flag set assembled, it was likely placed in storage to await presentation at some point during the war and, when that did not happen, the fact of the flag’s existence was overlooked when the end of the war was approaching and all other regimental colors were being destroyed.

The flag itself is a rising sun of the Imperial Navy style, with the sun offset from the center of the flag. It is printed on a heavy, high quality, polished cotton. This material has a feel rather close to silk but it is much more durable. The flag has a few light spots from storage but overall the flag itself, and all of the other components of the set, are in exceptional condition. The flag is approximately 28 by 37 inches in size, excluding the heavy braided royal purple fringe. The fringe adds about another 5 inches to the dimensions. The corners on the hoist edge are heavily reinforced gold cloth, and the flag set includes the original flag knots and tassels. These pieces, like the fringe, are in a deep royal purple color with gold backing inside of the knots. The flag set includes the regimental colors flag pole, which is a knurled wood design with black lacquer paint and nickel fittings. The pole is approximately 60 inches long when assembled. The pole can be separated into three sections for transport within the special colors case. The finial top is a three sided gilt metal pole top that displays a large royal chrysanthemum on every side. Accompanying the set is the original collapsible nickel stand which was designed to permit the regimental flag to be displayed in a static form within the regimental headquarters. The stand includes a base fitting that permits the flag to be displayed in two different positions: one position is relatively upright while the second position places the flag pole at an angle and causes the flag to fall away from the pole, making it more visible. The flag, pole top, knots, tassels, flag pole and flag pole base are all contained within their original carrying case. The case is wood, painted a deep purple. It is lined in a gold and white striped fabric. There are two pairs of leather adjustable straps within the case to hold the flag pole and the base in place during transport. The pole is contained within a golden cotton bag which has three separate compartments, one for each section of the pole. The care and workmanship that went into designing and making the case for the flag is as impressive as the quality of the regimental flag itself. The lid of the case is secured by two brass clasps and a brass locking latch in the center of the case. Tied to the inside of the case on a red and white silk ribbon is the small key that is used to lock the case latch once it is closed. One of the brass clasps is bent, but otherwise the case is in very good condition, showing primarily the effects of storage over more than 70 years. The front center of the case has a leather carrying handle attached and, at some point in the past, this handle was given a covering of white tape.

Interestingly, also found inside the case were three small Italian flags of the World War II period, and these remain with the flag set.

Overall this flag set is impressive in the extreme. In terms of quality, condition, and rarity, this cased Imperial Japanese Navy Regimental Flag represents an important, and likely unique, artifact of the military history of the Second World War. This is the only known surviving regimental flag from the war and, at this point in time, it seems highly unlikely that another will ever be found.