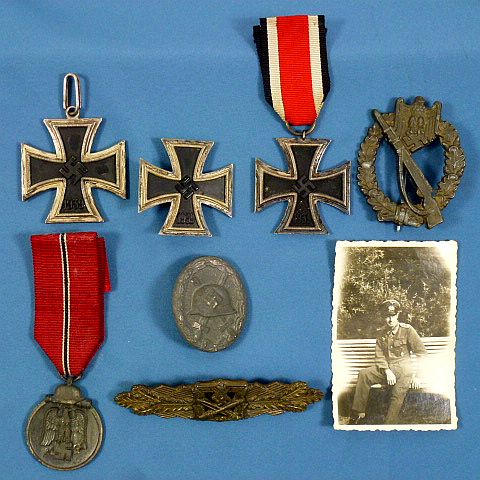 A group of medals and decorations of the Third Reich, including a Junker Knight’s Cross of the Iron Cross, attributed to Franz Bredemeyer, who was awarded the Knight’s Cross on 23 August, 1943, while sering in the army as a platoon leader with the 2./Infanterie-Regiment 156 (motorized).
The group is comprised of the following items:
– 1939 Knight’s Cross of the Iron Cross. The cross is marked with a horizontal Prasidialkanzlei number “2” (commonly referred to as the “Lazy 2”) on the reverse top of the frame, reflecting manufacture by the firm of C.E. Junker. The frame is also marked with an “800” silver designation, as is the suspension loop. The cross has the distinctive over lapping cross-hatching of the ridges in the inner corners of the silver frame which is characteristic of the Junker Knight’s Crosses. The iron core is magnetic. The core exhibits some paint loss on the obverse that was typical of this cross and there are some small, period, touch-ups of the paint loss with matte black paint.
– 1939 Iron Cross, first class. The cross is magnetic, with the wide pin marked with the Prasidialkanzlei number “26”, reflecting manufacture by B. H. Mayer’s Kunst-prageanstalt. The cross is i very good condition.
– 1939 Iron Cross, second class. The cross is magnetic, with the Prasidialkanzlei number “65” on the suspension ring, indicating manufacture by the firm of Klein & Quenzer. The cross is in very good condition.
– Close Combat Clasp in bronze, maker marked “R.S.”. The central back plate is lacking. The bronze finish is intact with a muted patina.
– Wound Bade in silver. The badge is solid, metal alloy construction. The badge has an overall matte gray appearance with the silver wash having been largely worn away.
– Infantry Assault Badge in bronze, as awarded to members of motorized infantry units. The badge is marked with the LDO code of “L53”, indicating manufacture by Hymmen & Co. There is wear to the bronze finish.
– Eastern Front Campaign Medal. The suspension rings is marked “65” for production by Klein & Quenzer. The original silver finish to the helmet and edge of the medal is worn, and there is some rust on the suspension ring.
– A small original photograph of Franz Bredemeyer. The photo is approximately 2 1/4 by 3 1/2 inches in size. In the photograph Bredemeyer is wearing his army uniform as walking out dress, with trousers and shoes rather than breeches and boots. His shoulder straps reflect the rank of Oberfeldwebel. He wears his Knight’s Cross at his neck and, on his uniform, he wears the Close Combat Clasp, the Iron Cross, first class, and the Wound Badge in silver. Beneath his Close combat Clasp he wears a ribbon bar with two ribbons, for the Iron Cross, second class, and the Eastern Front Campaign Medal.
The group as a whole reflects decorations that were obviously worn by the recipient but which are in overall very good condition.