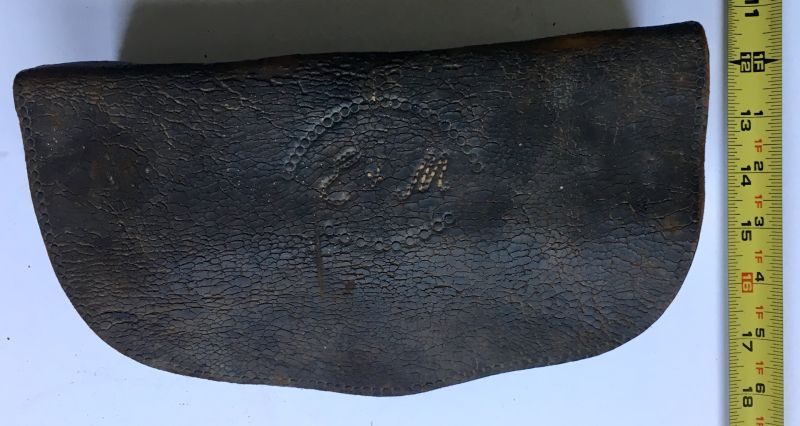 This box is a very close match for the American militia waistbelt box shown in
Neumann’s Battle Weapons page 26 upper left, though this one is set up for a
shoulder belt has the pronounced bag bottom characteristic of many American
cartridge boxes of the Revolution. The use of holes taking .75 caliber ammunition
also suggests an early date for the box, one before the large number of French .69
caliber arms started reaching American forces starting in 1777. The block is set up
in a 7-8-9 configuration. There is a little chipping or breaking out between five or six
of the holes. The flap is gently curved, about 10 ½ inches wide along the top and
extending down roughly six inches. The edge is tooled with a row of small circles.
These are repeated on the center of the box is two arcs, top and bottom, between
which is a set of initials actually stitched into the flap that appear to read “E + M” in
script. The latch tab is in place inside the flap. There is a remnant of a leather
fastening button, or the thong for one on the bottom of the box. There are no side
ears to the flap, inner flap or tall side panels.
The flap is rather stiff but will open slightly without damage. The ends of a shoulder
belt are visible sewn and/or tacked into the upper seam of the back of the box. They
appear to be a thin, light brown leather.