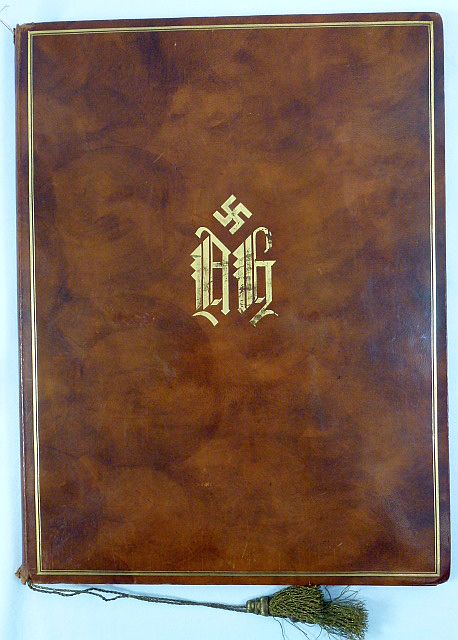 A large and impressive “Ehrenbergerbrief”, or “Honorary Citizenship Document”, through which Adolf Hitler was made an honorary citizen of the city of St. Polten (sometimes spelled “St. Poelten” in English). The city was located in what is now Austria but which at the time was a part of the “Greater German Reich” after the Anschluss.
The document is dated June 15, 1938, only a little more than 90 days after German troops had marched in to Austria on March 12, 1938. The document has an overall size of approximately 12 by 16 inches and it is contained within a marbled brown leather folder that is approximately 12 1/2 by 16 1/2 inches. The leather folder is lined with off-white silk. The stylized initials of “AH” appear on the cover. The citizenship document itself is a four page vellum piece on which the first page alone attests to the honorary citizenship, with the other three pages being left blank. The document declares itself as an honorary citizenship presented by the town council of St. Polens to Adolf Hitler. The document is completely hand lettered in German Gothic text and it was finely worked in two colors. The text of the document is a poem in three stanzas. The poem describes the strength and loyalty of the German farmer (who undoubtedly comprised the major portion of the population in and around St. Polens). The poem sets forth the commitment of the farmers to “protect our soil to the end” and proclaims to Hitler that “You have the pride of being in our souls”. The document bears the seal of the town and the original signatures of the four members of the town council. The document has a gold bullion cord with tassels that decorate the enclosure, which is tucked, and not stitched, into the leather cover. The leather cover shows evidence of wear at the top and bottom corners of the binding, and the vellum documents has a few light spots from age but overall the document and its leather folder are in very good condition.