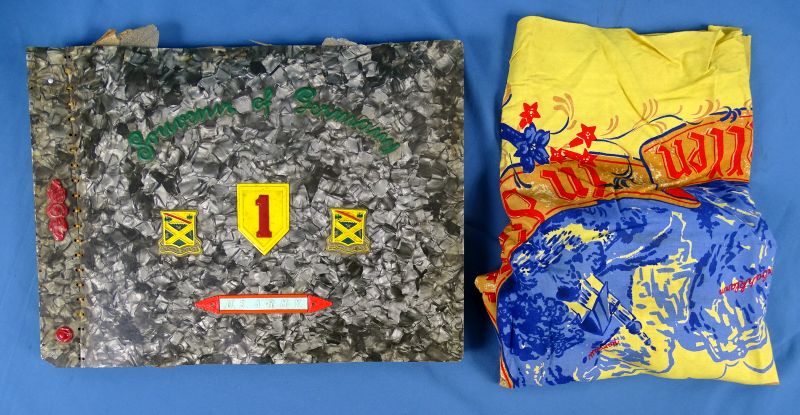 The album is approximately 9-1/4 inches by 12-1/2 inches and it contains approximately 78 photographs. The album was apparently prepared by Private First Class David P. Hendershot, a member of a signals unit in the 18th Infantry Regiment of the 1st Infantry Division. The album has celluloid covers which are mounted with a plastic 1st Infantry Division insignia as well as a pair of plastic 18th Infantry Regiment distinctive insignia. The album photographs depict winter maneuvers, life on base, photographs taken in Holland, and photographs taken at the site of Adolf Hitler’s Obersalzburg home. There are also two postcards, one of which shows the Third Reich era complex that was the Nazi Party Ordensburg leadership school at Sonthofen. A note on the reverse of that postcard written by Hendershot states that he was at that time being quartered at the complex. Inserted into the album is a certificate reflecting Hendershot’s completion of a Lineman training course. One of the pages of the album is detached. Also with the album is a large cotton souvenir scarf which has a hole in it.