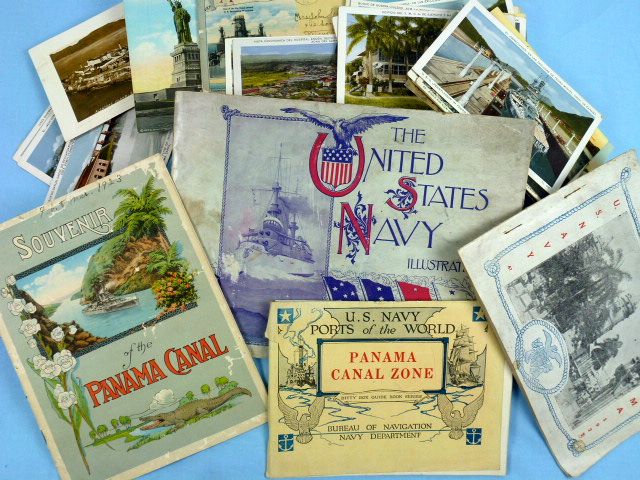 A large grouping of material relating to both the Panama Canal, and to the U.S. Navy in the Panama Canal, in the 1920’s. The group is comprised of
– 26 unused hand colored photographic postcards of the Canal, Canal zone facilities, and the ships of various nations making use of the canal;
– A booklet of connected postcard-sized hand colored photographs of the ships of the “U.S. Navy Atlantic Fleet”, with the photographs in a hard stock mailer that was mailed to Mauch Chunk, Pennsylvania in 1922;
– A soft cover, 62 page booklet, 5 1/4 by 7 inches, published by the Navy Bureau of Navigation as part of a series on “U.S. Navy Ports of the World”, this one being on the Panama Canal Zone;
– 20 page booklet, 6 by 8 inches, titled “U.S. Navy at Panama 1921”, with text and photographs;
– 16 page booklet, with hard stock covers, titled “Souvenir of the Panama Canal, with hand colored photographs of the Canal Zone and of various identified U.S.. Navy ships passing through the canal, circa 1923;
– A booklet entitled “The United States Navy Illustrated”, published 1898, 32 pages with hard stock covers, illustrating in black and white photographs the ships of “The Great White Fleet.”

All of the booklets show age, with some soling to the covers, but the booklets are sound and intact and quite presentable.