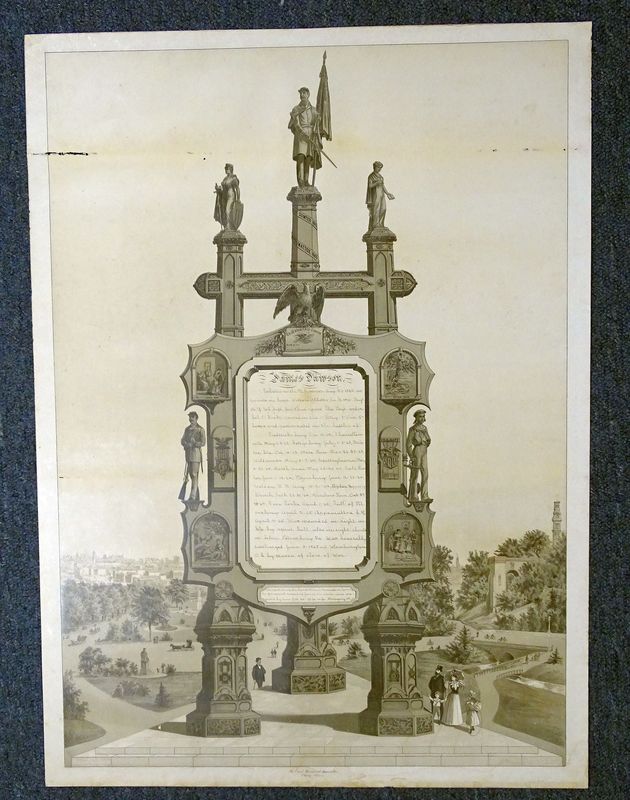 A large Civil War service accolade on heavy paper, 23 3/4 by 32 1/2 inches in size. The accolade was prepared in 1895 for James Dawson for presentation to his wife, with Dawson’s extensive Civil War service record being written in a fine script in the central panel of the document. The accolade records that, in 1862, Dawson enlisted in the 140th New York Volunteer Infantry Regiment, and participated thereafter in pretty much every major engagement in the east, from Fredericksburg through Gettysburg and on to the Wilderness, Petersburg and Appomattox. Interestingly, the accolade notes that Dawson “was wounded in right ankle by spent ball, also in right shoulder before Petersburg, Va.” There is a penciled notation on the back, apparently written by the individual who prepared the accolade, with Dawson’s name and a request for payment of $3.00. There are a few small holes in the accolade, as well as a 2 1/2 inch separation, which would essentially disappear if the piece was framed with white paper behind it. These are in the light field of the accolade and do not effect the image or the hand written service record. There is some toning to the paper, which is now almost 125 years old, but the document is large, impressive and entirely legible.