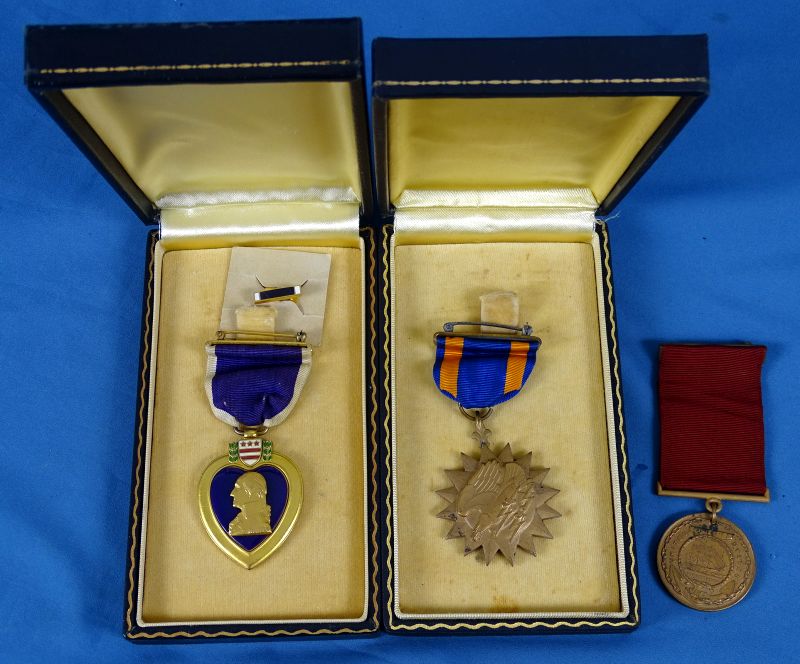 The decorations were posthumously awarded to Radioman Second Class John Earl Simpson, who served in the Pacific as a crew member of a PBY-5 Catalina aircraft of U.S. Navy Patrol Squadron 101. During a mission on February 24, 1942, immediately prior to the Battle of the Java Sea (and only a little more than two months after the attack on Pearl Harbor), Simpson’s aircraft was attacked by Japanese fighters and shot down. Simpson was classified as “Missing” until December of 1945, at which time it was concluded that he had not survived the encounter as a prisoner of war. His family was then posthumously presented with the Air Medal and the Purple Heart which are in this group. Additionally, Simpson had served in the Navy prior to World War II as a crew member of the USS Arizona, and it was while serving on the Arizona in 1933 that Simpson received the U.S. Navy Good Conduct Medal which is also in this group (it appears that Simpson originally enlisted in the Navy in 1929, and was discharged in 1935, later reenlisting in 1940). The Purple Heart is a World War II U.S. Navy silver gilt example with split brooch, officially hand engraved. The medal is contained within its titled U.S. Navy black leather case together with an enamel lapel badge. The ribbon shows a bit of wear. The Air Medal is a full wrap brooch suspension, officially hand engraved in the Navy style with not only Simpson’s name and rank, but also with the date of the action for which the award was made.  The medal is contained within its titled U.S. Navy black leather case. The Good Conduct Medal is a full wrap brooch suspension and it is officially hand engraved with Simpson’s name and the year “1933”. The group includes photocopies of the contents of Simpson’s U.S. Navy personnel file, which includes the official citation for the award of the Purple Heart. Overall the group is in excellent condition.